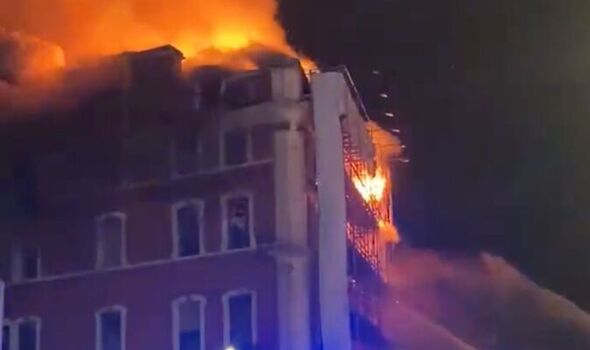 Massive flames can be seen at the Grosvenor Hotel, and plumes of smoke coming from the building can be seen from a far distance, residents have reported. The old hotel had been left empty and decaying for the last 20 years, and locals have often debated what should be done with the building.

Avon and Somerset Fire & Rescue has warned people to stay away from the area and fire services are currently tackling the blaze.

A spokesperson for Avon and Somerset Fire & Rescue said: “Our Control Room have received a large volume of calls regarding an incident on Victoria Street in Bristol city centre.

“On arrival, crews from Temple, Bedminster, Hicks Gate, Kingswood, Patchway, Avonmouth, Bath and Weston-Super-Mare found a fire on the ground floor of a derelict building and are working to tackle the blaze.

“We advise people to avoid the area while the incident is ongoing.”

In a further update the Fire & Rescue service took to Twitter and wrote: “There have fortunately been no casualties and a number of people have been safely evacuated from a neighbouring building.”

The fire rescue service said they received the first call about the fire on Tuesday evening at 9:58pm and have since taken a large number of emergency calls.

Resident Ella Taylor took to Twitter to comment on the huge blaze: “Scary watching this big fire in central Bristol, the flames got higher than this before the firefighters tackled it.”

Public transport service Travel West announced that delays are to be expected in the area.

They said: “Temple way has been closed in both directions between Redcliffe Way and Victoria Street, use alternative routes. Expect delays.”