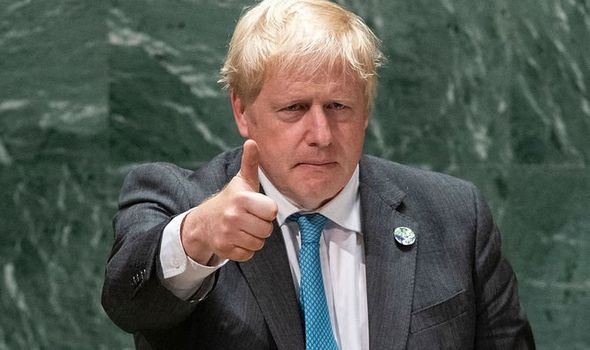 Fearing further panic and an escalation of the economic disruption, the PM stepped in with a plan to get the trucks rolling again – and prevent empty shelves at Christmas. He is backing a plan to ease immigration rules on overseas hauliers to put an end to panic buying at the pumps.

Whitehall insiders said temporary visas are “not a silver bullet” but part of a wider package to get supplies moving again.

But the PM is adamant any measures will be strictly time-limited.

A Government source said: “We believe in British workers being paid properly and we will not give in to big businesses who want to change immigration rules to drive down wages.”

Home Secretary Priti Patel has been ­reluctant to lift visa rules but is said to be supportive of moves to “fix the problem”.

Immigration rules are only a small part of the package but are being included to ensure supplies keep flowing for Christmas, Government sources said. The measures will be temporary and are also expected to include visas for some food processing workers for the poultry industry.

Petrol forecourt closures, triggered by a shortage of drivers rather than fuel supply issues, are said to have focused minds in the Government.

A No 10 spokesman said: “We have ample fuel stocks in this country and the public should be reassured there are no shortages.

“But, like countries around the world, we are suffering from a temporary Covid-related shortage of drivers needed to move supplies around the country.

“We’re looking at temporary measures to avoid any immediate problems, but any measures we introduce will be very strictly time-limited.

“We are now moving to a high wage, high skilled economy and businesses will need to adapt with more investment in recruitment and training to provide long-term resilience.”

Ministers have already speeded up the driving test process for drivers wanting to get their HGV licence.

The Government is also keen to encourage drivers who have left the industry to return.

Wages have rocketed as the industry scrambles to fill 100,000 vacancies, with some jobs attracting salaries of more than £70,000.

Supermarkets have also faced months of supply issues that have left them with empty shelves.

But the driver shortage has severely hit fuel supplies to petrol stations, leaving BP and Esso closing some forecourts.

Ministers have urged motorists not to panic buy, but queues formed at garages across the country yesterday as fears of shortages spread.

Transport Secretary Grant Shapps said the military will be drafted in to help distribute fuel supplies if needed. But he urged motorists to “carry on as normal” despite the closures.

He said: “The advice would be to carry on as normal, and that is what BP is saying as well.”

BP said yesterday that around 20 of its 1,200 petrol forecourts were closed due to a lack of available fuel, with between 50 and 100 sites affected by the loss of at least one grade of fuel.

A “small number” of Tesco refilling ­stations have also been affected, said Esso owner ExxonMobil, which runs the sites.

Lorry drivers do not qualify for work visas in the UK under the Government’s points-based system.

Mr Shapps has been reluctant to ease the rules because he fears recruiting from the EU creates more long-term problems. Ahead of yesterday’s talks with the PM, he warned overseas recruitment depresses wages.

He said: “Ironically, of course, every time you say, ‘Let’s open it up to Europeans, eastern Europeans’, and you undercut the marketplace, this is how we’ve ended up with this long-term problem.

“Because salaries have been reduced to a point where people are saying, ‘Well, that job’s not for me.’ Part of it is these conditions.”

Mr Shapps denied that Brexit was behind the shortage and said the split from the European Union had helped the Government react.

He added: “Because of Brexit I’ve been able to change the law and alter the way our driving tests operate in a way I could not have done if we were still part of the EU. So, Brexit actually has provided part of the solution of giving more slots for HGV tests, and there are a lot more tests available now.”

The driver shortage is nothing new to us. We’ve been warning ministers about it for years and the impact it’s had on firms across the haulage sector.

We were short of around 60,000 truckers for a number of years but that figure has soared to 100,000, and this is why we’re seeing less choice in stores.

Around 20,000 EU drivers have left the UK this year after the Brexit transition with no one to replace them.

New rules mean UK firms aren’t allowed to recruit from abroad so that labour supply has been lost. This is why we’re calling on ministers to put HGV drivers on the Government’s shortage occupation list for temporary visas to plug gaps.

We lost thousands of HGV driving test slots last year due to social distancing. Ministers have increased the number since restrictions were lifted by prioritising HGV testing but this is only chipping away at the backlog. It would take two years at increased capacity to give us the drivers we need right now.

We’re also hearing that some firms have people trained but they just can’t get a test slot, and the average HGV test first-time pass rate is around 58 per cent.

IR35 tax changes on self-employed workers put a stop to those cheating the taxman. This has weeded out rogue drivers but it means fewer truckers.

The problem we have now is we’re hitting our peak time as stocks are built up for Black Friday and Christmas.

Ministers say the industry has to do more to resolve the shortage. Some firms are offering free HGV training to support staff but it’s only a drop in the ocean. Better pay and conditions would help too.

Many drivers get generous signing on and retention payments but this isn’t sustainable. Most hauliers operate on a one to two per cent profit margin so there isn’t scope for big wage hikes.

The Government should change rules on unpopular five-yearly competence training, which many drivers see as meaningless and leave the profession.

We’ve got an ageing workforce where the average age is 57. It’s not cheap to become a driver. It costs around £3,500 to get behind the wheel, which is beyond the pockets of many young people.

● Richard Burnett is Chief Executive of the Road Haulage Association