Ferry operator P&O Ferries is to scrap its route between Hull and Belgium due to a sharp drop in demand because of coronavirus.

It is understood the number of services between Dover and Calais will also be reduced and 140 jobs are at risk across the company.

The RMT union said it was working with the ferry operator to protect jobs.

P&O said due to the “extended impact of Covid-19” it was taking “difficult action” in making redundancies.

The scrapping of the route means the Pride of York and the Pride of Bruges vessels will be taken out of service.

The Dover to Calais crossing will continue to operate, but will be reduced from six ferries to four, with the freight ferry European Seaway and the Pride of Burgundy being stopped. 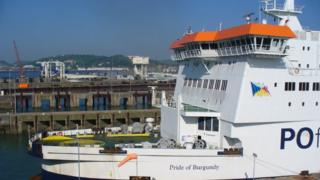 In a leaked consultation document sent to staff earlier this week, the company said a fall in tourist demand due to the pandemic and ongoing Brexit uncertainty were to blame.

Darren Procter, national secretary for the Rail, Maritime and Transport (RMT) union, said the Hull to Zeebrugge crossing had been a “challenging route for a number of years” and the pandemic had compounded the problem.

He added: “The Pride of York is an ageing vessel and because of the future financial costs P&O made the decision to cut their losses.”

Mr Proctor said scrapping the route would have a wider economic impact on Hull.

“The individuals travelling on these vessels will use local amenities, they might have a pub meal or stay in a hotel so it’s going to have a knock on effect.

“Obviously Hull has a rich maritime heritage and a lot of industry connected to the sea so it’s a shame it’s going.”

The Pride of York has not been running since the pandemic while the Pride of Bruges had returned to operation for a short period of time.

Read more stories from across Hull and East Yorkshire

Mr Proctor said the two affected ferries on the Dover to Calais route had not been in operation for some time and were both laid up in the Port of Leith in Edinburgh.

A spokesperson for P&O said: “Due to the extended impact of Covid-19, we are having to take further difficult action in which some jobs will be made redundant – but as a result thousands more jobs will be saved.

“These necessary steps will ensure we are a slimmer and more agile business that is better able to give customers the service they want and the value they demand.”

Earlier this year the ferry operator was criticised for announcing 1,100 job cuts after taking advantage of the government’s furlough scheme.