Black Lives Matter Leeds will tonight stage an emergency protest where the man was arrested in the city because its members feel officers used “blatant provocation” on Monday afternoon. The video, shared online, shows one officer using pepper spray on the man before two other members of the force pull him to the floor and put him in handcuffs.

Three more police officers arrive on the scene within minutes as a crowd quickly gathers around.

The man can be heard apparently crying in pain after being pepper-sprayed as onlookers ask why he is being arrested.

Police told Leeds Live it has liaised with Black Lives Matter to inform the group of “the full context and understanding of what occurred” during the arrest, but the demo is still scheduled at 6pm.

In a social media post, Black Lives Matter urged supporters to join them at the protest. 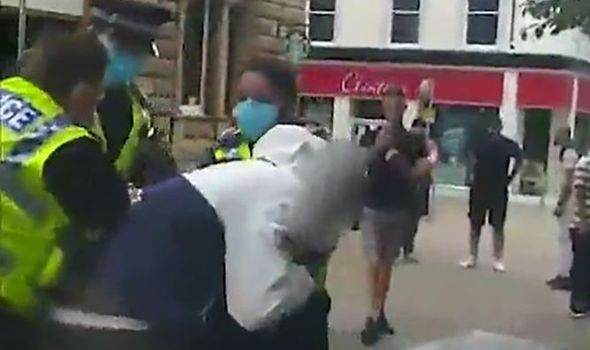 But police say the man was acting aggressively and had already been removed from a shopping centre twice in the minutes before his arrest.

Officers say he had also been drinking alcohol in breach of a Public Spaces Protection Order.

West Yorkshire Police said officers spoke to him for more than eight minutes and attempted to establish his identity as a suspect for those offences, but he repeatedly refused to provide his details, which police say is an offence in these circumstances.

Then, when officers tried to arrest him, police say he resisted, resulting in police using physical force and what they referred to as an “incapacitant spray” to detain him.

The man was taken into custody on suspicion of being drunk and disorderly in a public place.

West Yorkshire Police have confirmed that he admitted guilt and accepted responsibility for his actions and has now been given a community resolution, dealing with the offences outside of formal court proceedings.

He received no injuries during his arrest or detention and was released from custody earlier this morning.

A referral has been made to West Yorkshire Police Professional Standards Directorate so that the circumstances can be formally reviewed.

Chief Superintendent Damien Miller, Leeds District Commander, said: “We are aware that this man’s arrest has been the focus of speculation on social media, but we hope that by providing further context people will now have a fuller understanding of the circumstances leading up to officers detaining him.

“We recognise the understandable concerns that exist around police interactions with people from ethnic minority communities, and we continue to work closely with those communities through our Independent Advisory Group to improve trust and confidence, scrutinise police actions and decision making and increase transparency.

“We are also liaising with the organisers of a planned protest in relation to this incident to ensure they have the full context and understanding of what occurred. This includes inviting them to meet with us and view the officers’ body-worn footage in full.”

Royal snub: Vulnerable female prisoners ‘yet to hear from Meghan’ after sending letters