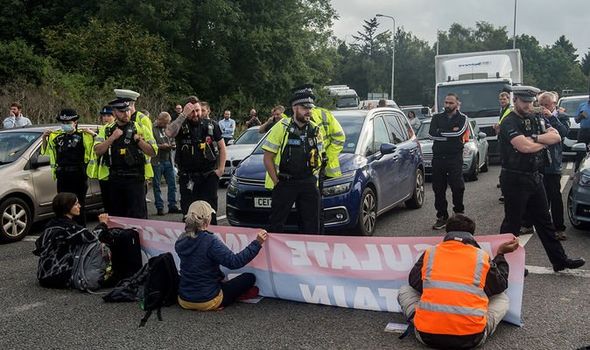 There were similar protests on the M3 in Surrey, the M11 in Essex and the M1 in Hertfordshire. But yesterday police reacted within minutes to arrest offenders after a “softly-softly” response to earlier protests caused hours of tailbacks.

They had been told by Home Secretary Priti Patel on Thursday it was time to get tough. Drivers gave police ironic cheers as they moved in to make 69 arrests.

Meanwhile, shameful footage emerged of a Met Police officer stopping traffic on the M25 on Wednesday to help protesters on to the road so they could commit a crime. He claimed he was concerned for their safety.

Images from a different site showed an officer asking protesters if they “needed anything”.

On Monday and Wednesday 180 people were arrested, mainly on suspicion of highway obstruction. They have all been released.

Ms Patel said: “This Government will not stand by and allow a small minority of selfish protesters to cause significant disruption to the lives and livelihoods of the hard-working majority.”

The Association of British Drivers said: “The police have failed to do their duty and at last we have a Home Secretary who wants to tell them to get on with the job they are paid for.”

Insulate Britain, an off-shoot of Extinction Rebellion, is calling for better home insulation. The Government said it was “investing £1.3billion this year alone” to support people to install it.

Tony Blair stands by belief that UK should have joined euro: ‘No doubt it was our destiny’
Asia