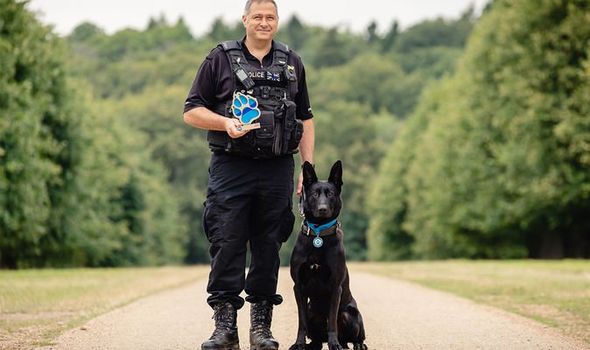 The three-year-old, a German Shepherd/Belgian Malinois cross suffered dreadful head injuries. Stark and handler PC Paul Hopley were sent to allotments in Handsworth, Birmingham, at 4am in November 2020.

In body cam footage, PC Hopley shouts: “Police, stay where you are!” but the intruder flees, with Stark in pursuit.

His handler yells: “Stop hitting the dog” as the violent attacker beats Stark with a machete – which the officer thought was a stick.

Despite being hit more than 20 times, Stark detains the thug.

The officer radios to colleagues: “He had a machete and was attacking my dog. The dog’s injured.”

Gory images of cuts to Stark’s face show how lucky he was not to lose his eyes.

PC Hopley said: “Stark was hit over 20 times but he didn’t yelp, he didn’t leave him or run back to me for protection.

“He was such a young, inexperienced dog but he stayed on task and, despite being viciously attacked, he never backed down.

“Stark suffered nasty cuts to his face but thankfully he’s made a full recovery. His career is flourishing.”

Kate Middleton news: Where did Kate and William have secret romantic lunch on royal trip?