The 47-year-old was left in need of treatment after being targeted by someone in the crowd towards the end of a fiercely contested 0-0 draw at Tynecastle on Wednesday night.

In a similarly violent incident, Hearts goalkeeper Zdenek Zlamal was struck by an apparent attack from a supporter. And after the game, a 25-year-old man was arrested over an alleged assault on an assistant referee.

Lennon, who was hit by a pound coin after Hearts player Clevid Dikamona had a stoppage-time goal ruled out for offside, said he hoped he would be able to meet his assailant face-to-face. 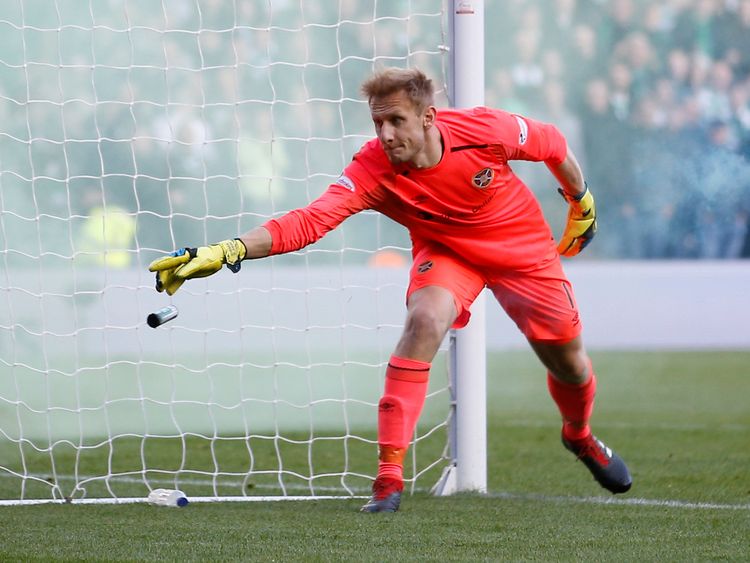 “It’s disgraceful. I don’t blame the club – you can’t legislate for the hatred of some individuals or the badness. What possesses people to throw things on to a football pitch I will never know.

“I would like to meet the individual who threw the coin at me some day, because I am not happy about it at all.”

Zlamal appeared to be struck by the arm of a fan in the Hibernian end as he went to retrieve the ball from behind his goal during the match – and missiles appeared to rain down as he got up and gestured in defiance.

Lennon – who was previously assaulted by a Hearts fan on the touchline while manager of Celtic – described the attack on the Czech goalkeeper as “ridiculous”.

He added: “We don’t defend that behaviour from our supporters as well.”

Police Scotland said the incidents were “mindless acts of violence” and added that officers are investigating.

Five arrests have already been made.