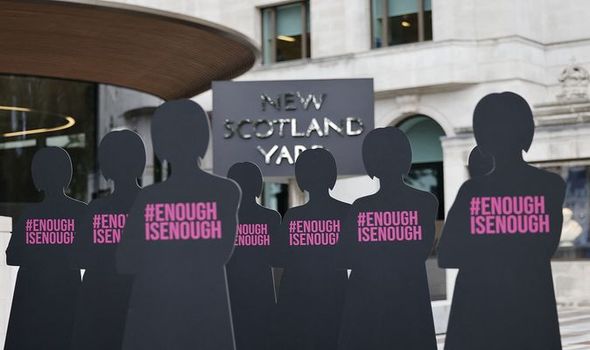 In some of these cases officers resigned or were sacked, but others have been able to keep their jobs despite being found guilty. A Sunday Express investigation into police misconduct proceedings found several examples of the inappropriate sharing of pictures of dead bodies at crime scenes by officers via messaging apps. In May, two Met Police officers apologised for sharing selfies allegedly taken by the bodies of knife murder victims Bibaa Henry and Nicole Smallman in June 2020.

They are due to formally enter pleas on Tuesday but have indicated they will plead guilty to offences of misconduct in public.

In September, a Northumbria Police officer avoided prosecution after it was found he took “images of a deceased person and shared them with another officer”.

The unnamed officer stayed in post after undergoing “reflective practice” after misconduct proceedings.

In July, an unnamed Greater Manchester Police officer received a written warning after sending a picture of a dead body to a member of the public for no policing purpose.

Public trust in the police has diminished in the wake of the kidnap, rape, and murder of Sarah Everard, 33, by Met Police officer Wayne Couzens, 48. Couzens was sentenced to a whole-life tariff, which he is seeking to have reduced.

As Britain’s biggest force, the Met sees the most misconduct hearings. Several officers were recently reprimanded for a string of sexually motivated allegations.

These include inappropriate advances to suspects, victims or colleagues, sexual assaults or harassment and messaging people indecent images.

From 2016 to 2020, about 80 Met Police officers were found guilty of a form of sexual misconduct after disciplinary hearings. But half kept their jobs following another form of sanction.

In many cases, officers were not charged with an offence as misconduct proceedings have a lower burden of proof than criminal courts.

It comes after three Met Police officers were charged with sex offences in the past month.

Detective Constable Francois Olwage, 51, appeared at Basingstoke magistrates’ court on Friday, where his case was sent to a crown court.

He was arrested a day earlier and charged with sexual grooming offences in connection with a girl aged under 16. Olwage pleaded not guilty on all counts. Another Met Police officer appeared at Westminster magistrates’ court last Wednesday charged with rape.

He was remanded in custody and the case adjourned for a plea hearing at the Old Bailey on November 24. PC Adam Zaman, 28, who denies the offence, is accused of raping a woman at a hotel in central London last Sunday.

PC David Carrick, 46, who is from the same Met Police Parliamentary and Diplomatic Protection Unit as Couzens, was charged with rape on October 3.

It is alleged that, while off duty, he attacked a woman in a hotel in September 2020.

St Albans magistrates’ court heard he “emphatically denies” the offence and the case was adjourned for a further hearing tomorrow.

A Met Police spokesman said: “The Directorate of Professional Standards is responsible for making sure all Met officers and staff adhere to the high standards expected of them. It works closely with the Independent Office for Police Conduct to make sure that, when it’s appropriate, lessons are learned and the necessary changes are embedded.”