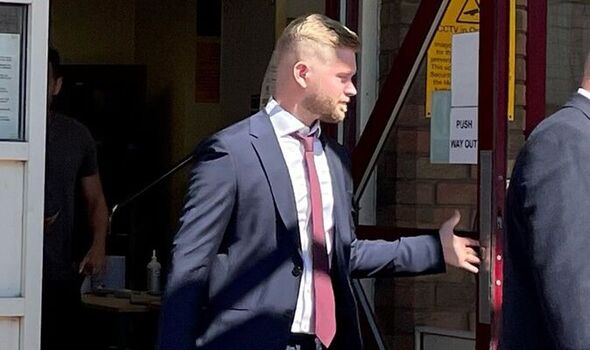 An Essex police officer has denied assaulting an emergency worker after being accused of delivering “an elbow strike to the head”. PC Charlie Thompson, 25 of Essex Police is accused of one count of assault by beating. The officer appeared at Colchester Magistrates Court on Wednesday where he denied the charge which relates to an incident on January 19.  Thompson, of Dedham Road, Boxted, Essex went to help colleagues after they stopped a car on suspicion of using a mobile phone behind the wheel where there was a scuffle before the driver, Zeki Badruddin was handcuffed on the side of the A127 in Basildon.

The court heard how Mr Badruddin was arrested on suspicion of assaulting an emergency worker but not prosecuted.

Prosecutor Micaila Williams told the court that Mr Badruddin was already seated in handcuffs when Thompson arrived at the scene.

She said: “A number of officers were deployed to the scene. By the time the defendant arrived, the incident appeared to have de-escalated.”

She said Thompson began “by saying, ‘All right, mate?’ and asking his (Mr Badruddin’s) name”.

She told the court that when Mr Badruddin “turns and asks him what’s he’s doing”, the officer “takes him to the ground” and told him to “get on the ground”.

Miss Williams told the court Thompson delivered an “elbow strike to the head area” of Mr Badruddin and later pushed him to the ground.

Mr Badruddin told the court he chipped a tooth during the alleged assault.

He said: “There was no reason for anyone to be coming near me. I was sitting down. I couldn’t move. I wasn’t being aggressive to anyone.

“I was having a conversation with a couple of officers in front of me.”

Andrew McGee, defending, suggested Mr Badruddin’s legs were not restrained at the time.

Mr Badruddin said: “They were – I had knee straps on and ankle straps.”

Mr McGee said the “fact Mr Badruddin wasn’t prosecuted is neither here nor there – it’s irrelevant”.

Following the incident, Thompson was put on restricted duties and a mandatory referral was made to the Independent Office for Police Conduct.

Thompson denies the charge against him.