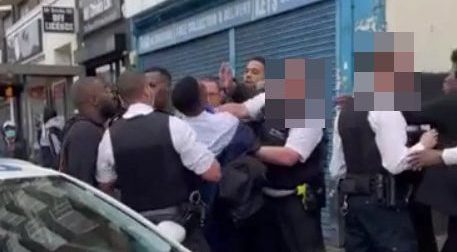 A schoolboy was allegedly choked by a Met Police officer during a stop-and-search in south London.

Benjamin Olajive, 13, was on his way to McDonald’s last Tuesday when he was swarmed by police responding to a report of a black person with a knife – and he was identified as the suspect on CCTV.

Shocking videos sent to Metro.co.uk show five officers putting Benjamin, who has ADHD and PTSD, in handcuffs while they search his clothes and backpack for a weapon.

Benjamin can be heard crying ‘my hands, my hands’ as his wrists are tightly pulled behind his back and his head is forcefully pushed down.

Pictures allegedly show Benjamin’s bloodied school shirt from where his wrists were shackled. They also reveal Benjamin was left with a badly swollen left eye following the incident.

In the distressing footage, Benjamin’s screams for help drew the attention of people on the street who gathered around and called for his immediate release.

They repeatedly yell ‘have you found a knife?’ and ‘he strangled him!’ as tensions escalated.

Dozens of people eventually surrounded the officers, who kept a strong hold of Benjamin.

The Metropolitan Police said Benjamin ‘tried to get away from the officers’ and was ‘handcuffed in order to allow a search to be carried out.’

They also claim he ‘kicked a police car a number of times, causing dents’ and was ‘arrested on suspicion of causing criminal damage.’

According to witness statements, the stop-and-search lasted about 45 minutes, before Benjamin was put in a van and taken to Brixton police station.

Police said the ‘item’ someone reported as what they believed to be a knife was actually an afro comb.

His mother Zeyna Kada is now accusing the Met of using excessive force against her child.

She claims he was ‘manhandled’, ‘strangled’ and ‘scratched’ during the struggle, and that officers did not take his special needs into account.

Ms Kada, who lives in Croydon, told Metro.co.uk: ‘Benjamin was waiting for the 109 bus and we were speaking on the phone and he told me that he was going to McDonalds.

‘Then five officers rushed to him and he was really confused as it was his first experience with police, so he was not expecting any of it and did not know what was happening.

‘They put him in handcuffs and pushed his head down. Then they told him they received a call about someone matching his description carrying a nine-inch knife.

‘Members of the public started gathering around. He took out a comb and said that this is what he has.

‘No one is against stopping and searching people, but this is a child and they checked him three times for 45 minutes and nothing, so why did they not let him go?

‘My child is now traumatised. They [officers] were told he has special needs, so why did they not provide him with duty of care?

‘What if members of the public were not there? What would have happened with my son? This is what I keep thinking.

‘Why must my child go through this when he did not have a knife on him?

‘When approached, the boy physically resisted and tried to get away from the officers.

‘He was restrained and handcuffed in order to allow a search to be carried out.

‘A knife was not found. The item that had initially been seen by a member of the public was identified as an afro comb.

‘As he was being restrained, he kicked a police car a number of times, causing dents. He was arrested on suspicion of causing criminal damage.

‘As officers began to conduct the search, a large crowd surrounded them. A further call was received from a member of the public at the scene who feared for the safety of the officers.’

The spokesperson confirmed no further action will be taken in relation to the damage to the police vehicle.

They added a complaint has been received over the incident, and it is being assessed by the South Area Professional Standards Unit.

Coronavirus warning: UK won’t be back to normal until summer

Barred From Rallying Near a Scorched Notre-Dame, ‘Yellow Vest’ Protesters March On