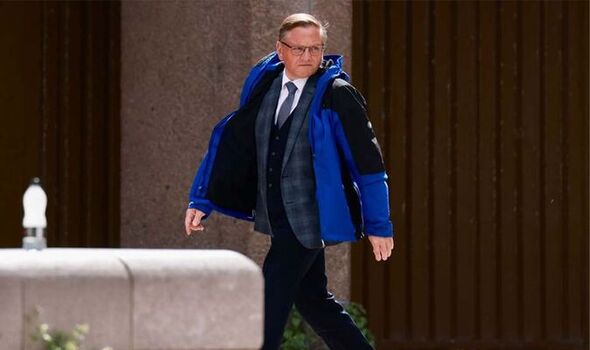 Andrew Parkinson, 55, of Willows Lane, Bolton, picked the boy up and carried him to his parents’ house. The boy’s dad reportedly opened the front door to find him “terrified and white as a sheet”.

Parkinson was a special constable for Greater Manchester Police when he assaulted the little boy in Bolton, in May last year, but Liverpool Magistrates’ Court heard this morning he is now likely to lose that position after being convicted.

Despite being found guilty, Parkinson told probation officers as recently as a few weeks ago that he didn’t think what he did was wrong, the Liverpool Echo reports.

Joshua Sanderson-Kirk, prosecuting, said Parkinson’s trial in June had heard that he was walking along the street where both he and the boy’s family lived at the time.

The boy, who cannot be named for legal reasons, was playing with other children who lived nearby and they were spraying each other with water. Mr Sanderson-Kirk said the boy accidentally sprayed Parkinson with water and he immediately became angry, got face to face with the boy and started telling him off. The court heard the boy then tripped and fell towards him.

Mr Sanderson-Kirk said: “His forehead made contact with Mr Parkinson. He then took hold of [the boy] around his neck and shoulders, picked him up and carried him to his father’s house.”

He said the dad opened the door to see his son looking “terrified and white as a sheet”. A neighbour sitting nearby and the other children who had been playing with the boy also saw the incident, and an argument then broke out close to the boy’s home before Parkinson was reported to the police.

He denied assault by beating, saying he was acting in self-defence after what he thought at the time was an attempted head-butt by the boy, but was convicted after a trial in June. The boy did not suffer significant injuries but was shaken by the incident.

District Judge Wendy Lloyd said that in interviews with the probation service after the trial Parkinson appeared to accept that what he did amounted to assault – but he then said he didn’t think it was wrong.

Ben Berkson, defending, said Parkinson, who is described as a “devout Christian”, deeply regretted the incident and wanted to compensate the boy’s family. Mr Berkson added that Parkinson realised he was very likely to be stripped of his role as a special constable, something he had done for 35 years. He had already been suspended by GMP.

Mr Berkson said: “Being a special constable was a role he was very grateful for and proud of and it is one which he is now going to have to accept will probably be taken from him.”

District Judge Lloyd said Parkinson’s three decades of experience as a volunteer police officer meant he had even less of an excuse for what he did and that it was clear the incident had been “nasty and upsetting” for the boy. She said: “You should have known better. You should have known more than an ordinary person how to deal with a difficult situation involving a child. All you had to do was walk away. That was a simple solution to this.”

District Judge Lloyd added: “Society has to send out the message that it is completely unacceptable to manhandle a child in this way. He was no contest for you. You were a grown man and he was a little child and you used that to your advantage.”

Parkinson, now of Willows Lane, Bolton, was ordered to pay prosecution costs and £250 compensation to the boy’s family. He must also carry out unpaid work and 25 rehabilitation days with the probation service.

A restraining order prevents him from contacting the boy or his parents.

Amnesia Grips a Bosnian Spa That Served as a Rape Camp