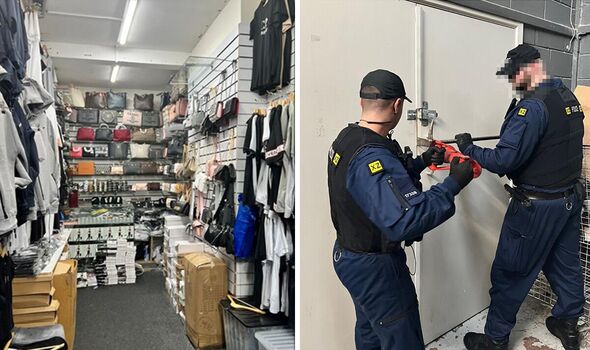 Police in Manchester rescued 30 Christmas shoppers after they were trapped inside a building in chilly weather conditions in Manchester. Officers from Operation Vulcan, a multi-agency initiative targeting crime and anti-social behaviour in the Cheetham Hill and Strangeways area, were conducting high visibility patrols on December 6 when they heard voices inside crying for help.

In response, they forced their way in using section 17 – an emergency warrant granted to preserve life – and discovered a group huddled inside.

They then discovered that one of the people working in the shop had been alerted by ‘spotters’ in the area – people paid to keep watch and alert illegitimate business owners of approaching police officers.

The individual then locked the premises and fled, leaving members of the public trapped inside.

On rescuing the stunned group, officers found an elderly lady with a broken arm who needed help getting down the steep and narrow flight of stairs towards the exit.

Searched the building, they found what GMP describe as a “rabbit warren” of single-room shops selling counterfeit designer clothes, watches, electronics and various other items.

Officers bagged, tagged and seized all the items inside the building – a process which took more than five days.

Detective Superintendent Neil Blackwood said: “Our officers had a duty of care to force their way in and safeguard the individuals who had been trapped inside a building that was structurally unsound, utterly unsafe and from which they had absolutely no means of escape.

“I appreciate that at Christmas time everyone wants to find a bargain, but by going to these illegal shops in the Cheetham Hill and Strangeways area, consumers are not only funding criminality, they are also putting themselves in very real danger.”

He added: “This isn’t the first report we’ve heard of members of the public being locked in – sometimes for hours – and we’ve even received reports of customers being assaulted by staff.

“This latest seizure will make a dent in the finances of criminals but where Operation Vulcan will make the most impact is if members of the public start to shun these illegal businesses.

“They are bringing devastating harm to our communities and those running them have no regard for your safety or welfare.”

Rule 1 at the G7 Meeting? Don’t Get You-Know-Who Mad

Meghan Markle reveals what helps her deal with ‘vitriol and noise’