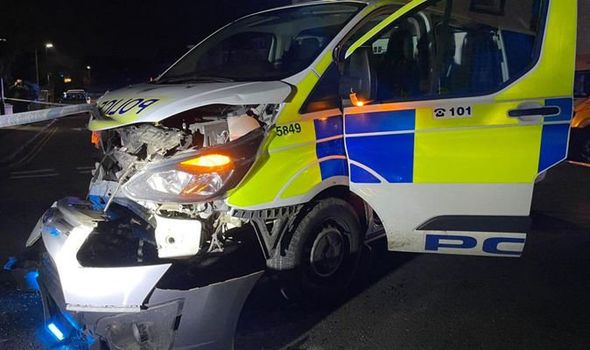 The incident happened near the junction of Fitzroy Street and Leed Street in the village of Sandown on Thursday evening. A cordon has been put in place as police continue to investigate the incident.

Issuing a statement on Facebook, the Isle of Wight police force said the driver of the Mini has been arrested on “suspicion of drink/drug driving”.

Police Sergeant Radford said: “We are currently dealing with an RTI in Fitzroy Street / Leed Street in Sandown between a police van and a Mini, the road will be closed for a while.

“Whilst I can’t say much at this time I want to make it clear so we don’t have speculator online as I’ve seen some reports and posts.

“This means it is out in the public domain and I can share some information to reassure you about the vehicles involved.”

He went on to say how the police vehicle was out on a normal patrol when the mini did not stop to give way.

Sergeant Radford continued: “It appears the police vehicle was on normal patrol and the mini the has not stopped at a give way.

“The driver of the Mini has been arrested on suspicion of drink/drug driving.

“The passenger of the mini has been taken to hospital.

“2 police officers have been taken to hospital (they are aware of this post).

“All next of kin have been notified.

“More official comms will go out to the media and on here in due course.

“Thank you for being understanding whilst the road is closed and we make some noise at this late hour.”

According to reports, a fire appliance from Hampshire and Isle of Wight Fire and Rescue Service was dispatched.

Several resources from the Isle of Wight Ambulance Service also attended the incident.

Southern Vectis buses are diverting routes as they are unable to serve stops near where the incident happened.