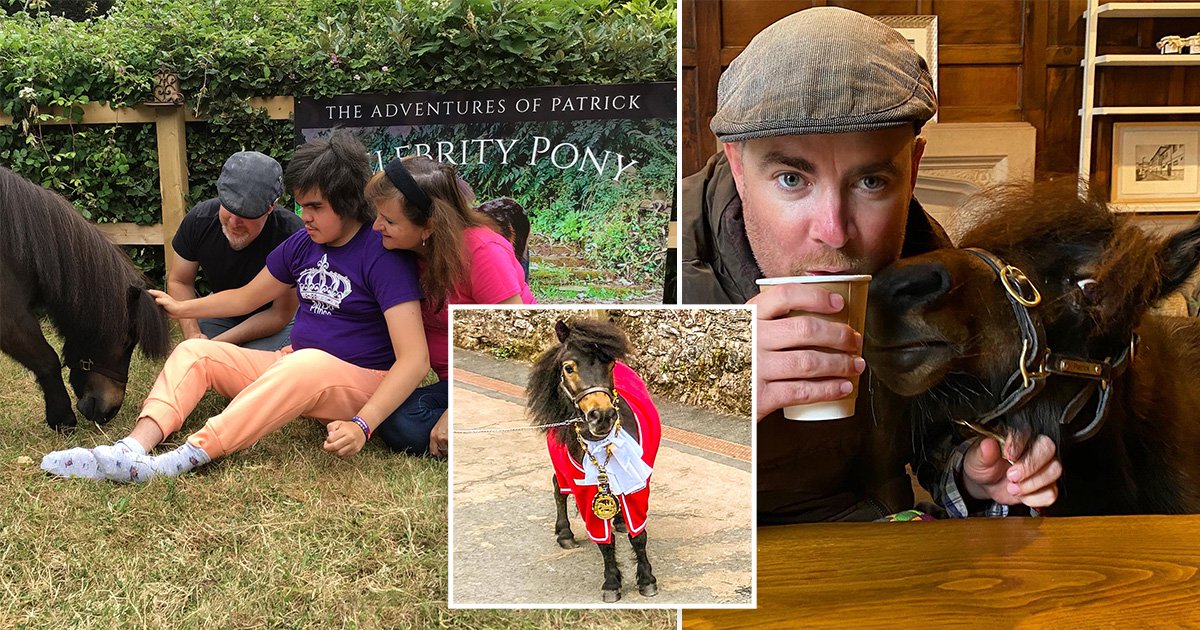 The honorary mayor of a town in Devon has remained defiant after being banned from his local pub.

Council bosses have barred beer-loving Patrick the Pony from The Drum Inn, in Cockington, where he was often seen knocking back pints of Guinness.

Officials told the pub it needed planning permission to let the four-year-old roam in the garden which needed to be changed to official grazing land.

Despite not being allowed to enjoy a tipple at his local and meet residents, Patrick’s owners have vowed he’s remaining as mayor after being elected on 23 July.

Owners Kirk and Hannah Petrakis, from Torbay, claimed he was being targeted by cruel ‘bullies’ trying to push him out after the council made the decision when it received a complaint from a member of the public.

‘He is still a mayor in many people’s eyes – even the local MP’s eyes!

‘We will carry on for the moment, just going into schools, hospitals and intensive care units.

‘If we had a vote on it all of Torbay would vote for him to stay.

‘We’re still going to go on and this is not the end of Patrick the Pony by any means.’

Patrick, a Shetland Pony, first visited the pub two years ago to help him get acclimated to crowds.

It is vital for Patrick’s role as a therapy horse helping the elderly and people with special needs.

Kirk and wife Hannah, 37, built a pen at the pub after locals wanted the pony’s presence in the village.

The pub has supported the couple and is also devastated by the news.

Hannah, who runs K&H Cocklington Carriages alongside her husband, added: ‘The pub saw how much it benefited everybody who lives in this area.

‘He is still the Mayor of Cockington and we still hope to do things – the pub is fantastic, as are most of the people in the village.

‘The pen has been up almost a year so we feel it might be someone who objected to him being the mayor.’

Patrick used to go to the pub daily, but this has since dropped to once a week after moving further away for better winter grazing.

The couple are now looking for a new spot so people can still visit him.

Locals had approached the couple terrified that Patrick had died after not seeing him in his usual spot.

A Torbay Council spokesman said: ‘We can confirm that following a complaint from a member of the public, an enforcement case has been opened into the erection of unauthorised timber fencing and the display of advertisements within the beer garden of the Drum Inn, Cockington.

‘This is in a designated conservation area and is next to a listed building, and we need to ensure historic areas like this are protected from unauthorised development.

‘The Council has not received or approved any planning applications for the fencing or the change of use for horses.’

Patrick was anointed mayor at a ceremony on 23 July after hundreds backed an online campaign to elect him to the post after the death of previous mayor Don Mills.

Patrick is the official mascot of the War Horse Memorial and visits hospitals, care homes and rehabilitation centres, alongside raising money for local causes, two ADD units and Ukraine.

Royal revelation: How legal loophole could have led to Anne becoming Queen