Saagar Enjeti is the co-host of Breaking Points with Krystal and Saagar, which describes itself as a “fearless anti-establishment Youtube show and podcast.” While failing to specify his actual experience of Europe, the presenter made sweeping claims about the state of society and culture in the continent compared to America. He had been responding to a Twitter user asking why more Americans don’t move to Europe.

Mr Enjeti tweeted: “Europe is substantially poorer, more racist, less dynamic, and MUCH less free than the US.

“Food is bland, coffee tastes like s***, the weather is mostly awful, their primary cultural export is tourism, and they have less say in the affairs of the world.”

As his tweet exploded with nearly 10,000 replies, Mr Enjeti stoked the fires further. He posted a picture of himself drinking coffee with the caption: “Enjoying a beautiful bright FULL American drip coffee without some stupid biscuit on the side that I don’t need.”

Some Americans agreed with Mr Enjeti, with one saying he visited Barcelona but was disappointed to find there were “no good steak houses”.

Another added that while they were “too poor” to leave the USA, they were still sure it was “the greatest country alive”. 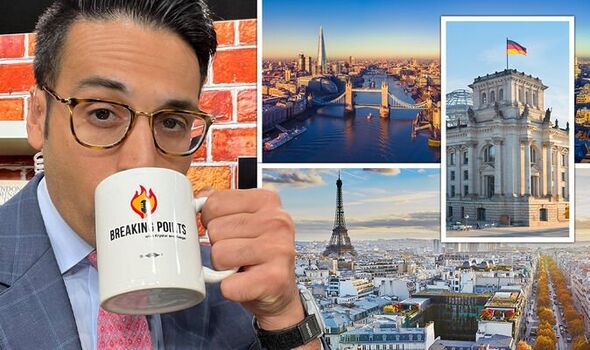 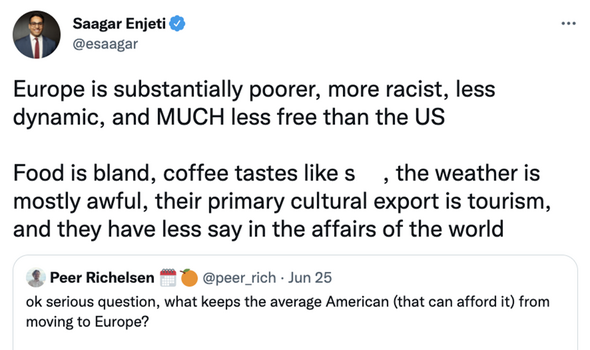 Many however expressed their disbelief at the claims, with users from both sides of the pond disproving Mr Enjeti’s statements.

“And we don’t have to teach schoolkids how to use bullet-proof blankets.

“PS. Your cheese is terrible.”

Some Americans agreed with this sentiment, with @MosesPompilus adding: “The whole not getting shot while food shopping with my family seems appealing.” 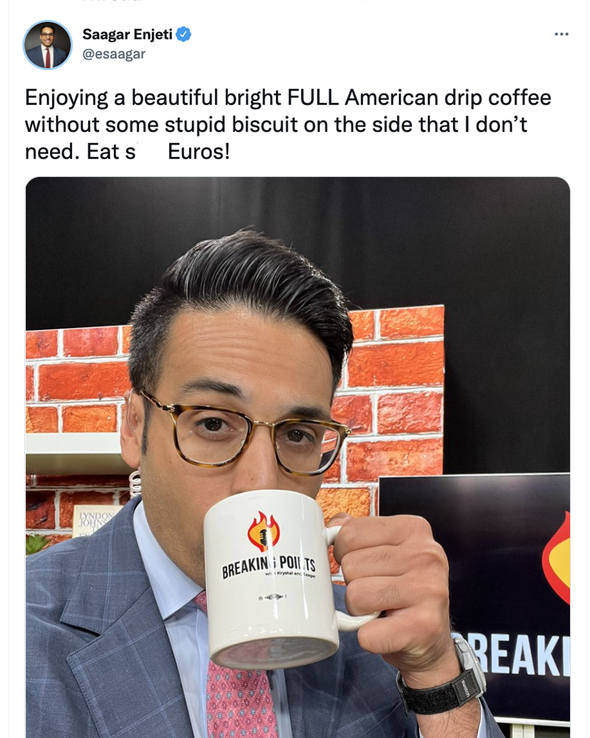 Others took a more scientific approach to arguing against his claim, with @JamesKAArcher adding: “Taste is a personal perspective and you are welcome to yours.

“However, we generally allow less faeces, fewer insect parts and fewer larvae in our food.

“We also have significantly less food poisoning & if we do get it, we won’t risk financial ruin getting medical treatment for it.”

Meanwhile @David_Ewen pointed out that while Europe’s overall income is lower, this does not necessarily translate into a better standard of living, as “what matters more to most people is wealth distribution.”

He added: “US overall income has a way higher share in the hands of the top 1 percent, so life for ordinary Europeans is probably better than that of ordinary Americans.”

Other users hypothesised that Mr Enjeti’s claim was merely a deliberate attempt to start an argument in order to bring more traffic to his Twitter page and promote his podcast.