Days after European elections emboldened nationalists in the heart of Europe, Pope Francis was scheduled to arrive on Friday in Romania, on the Catholic and European periphery, to assert himself as the global conscience on the dangers of populism.

In his three-day trip to the former communist country, now a staunchly pro-European member state, the pope will try to heal an ancient schism between the Catholic and Orthodox churches.

But he will also remind the Continent of its common values and lend support to a Roma ethnic minority that, in some countries, has again become a target of right-wing vitriol.

In recent years populists have surged from the margins to bring down or weaken the pope’s pro-European allies, most recently in France and his own Italian backyard.

On Friday, Romania seemed more welcoming to his message. The pope was scheduled to ride to Bucharest’s historic city center, where cheering crowds gathered under Vatican flags and stately buildings.

At Revolution Square, he will pass the spot where the dictator Nicolae Ceausescu gave his final speech from a balcony now adorned in a blue banner proudly noting that Romania, which joined the European Union in 2007, holds the bloc’s rotating presidency.

Around the historic center, images of the smiling pope hung over cobblestone streets dotted with Orthodox churches, outdoor cafes and bookshops.

The pope’s meeting with government officials, including the prime minister, in the early afternoon at Cotroceni Palace comes at a tense period for Romania.

On Monday, Liviu Dragnea, the leader of the governing centrist Social Democrats and the most powerful politician in the country, was sentenced to more than three years in prison for abuse of office.

And over the weekend, the party suffered a steep drop in support in European Parliament elections after years of engaging in what Brussels considered backsliding in its fight against corruption. 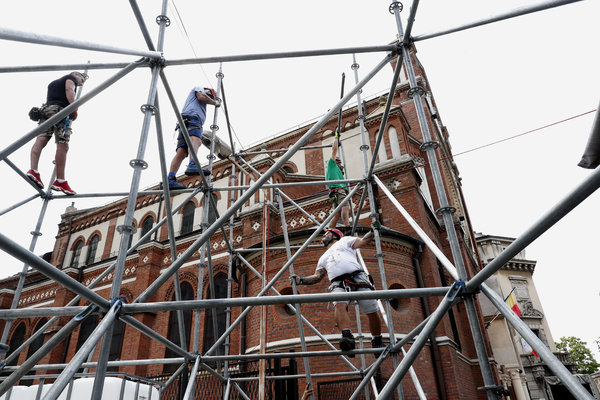 After addressing the political leaders, Francis will shift his focus to church politics.

Similar to Bulgaria, which the pope visited this month to a chilly reception, Romania is overwhelmingly Orthodox. Some Catholics, who compose around 5 percent of the population, have noticed a colder shoulder in the dozen or so years since Patriarch Daniel was chosen to lead the church.

“The distance between the two churches has grown since 2008,’’ said Mihai Fratila, the Greek Catholic bishop of Bucharest. “It’s a shame because there are mixed families that have no problem sharing” their Christian faiths.

The Rev. Francisc Dobos, a spokesman for the Catholic Archdiocese of Bucharest, said, “I would like to have better ties.”

Beyond the relations between the churches, Father Dobos said he hoped the visit would inspire tolerance across Europe.

“We have seen over the last months, years, in Europe the tensions,” he said. “Or the fear of the other.”

Romania has not seen the rise of hard-right populists whose aggressive language against migrants has alarmed the pope.

On Monday — the day after Marine Le Pen’s far-right party in France dealt a major setback to President Emmanuel Macron and Italy’s Matteo Salvini shattered the competition in the European vote — Francis described how migrants “are often looked down upon and considered the source of all society’s ills.” He worried that fear was “making us intolerant, closed and perhaps even — without realizing it — racist.”

The Bible teaching that “the last shall be first,” Francis said, reminded him most of migrants. That night, on Italian television, Mr. Salvini was asked if he didn’t see a certain dissonance in campaigning with rosary beads while using the “Italians First” language that seemed opposed to the pope’s message.

“The last shall come first,” Mr. Salvini said. “Among the Italians.”

It is not only migrants for whom Francis has expressed concern.

Mr. Salvini, Italy’s interior minister, has proposed a census of Italy’s Roma population to expel those without citizenship and has livestreamed the bulldozing of some of their encampments.

Critics have recalled that Benito Mussolini, the fascist dictator Mr. Salvini sometimes echoes, destroyed nomad camps and called the Roma “subhuman.” He ultimately sent at least a half million Roma to die alongside Jews in Nazi death camps.

In Bucharest, in a quiet square near urbane coffee shops, the city’s Holocaust memorial notes that 25,000 Roma were deported alongside hundreds of thousands of Jews throughout Romanian occupied territory. An estimated 11,000 Roma were killed.

In May, after neo-fascists in Rome violently protested Roma families who had been given spots in Italian public housing, Francis invited 500 Roma to meet him at the Vatican. He told them that despite the government’s attitude, they were “not second-class citizens” and that they had his respect.

On Sunday the pope will travel to Blaj, in Transylvania, where he will meet representatives of the Roma community, a clear effort to amplify his concern for their plight.

“A message, particularly from the pope, on the Roma community of Blaj, or anywhere, it doesn’t matter, will be very helpful for us,” said Damian Draghici, a renowned Roma musician who became a counselor to the Romanian government on Roma affairs and was later elected to the European Parliament.

On the eve of the pope’s arrival in Bucharest, Mr. Draghici walked around a Roma community on the outskirts of Bucharest. As dogs barked and traditional Roma music emanated from behind wooden walls, he greeted families living in warrens of tiny rooms padded with mattresses, amid hallways cluttered with stacked pots, plastic tubs of water for laundry and worn soccer balls. Plywood and exposed wires hung from the ceiling.

Some residents knew the pope was coming, and were happy.

Mr. Draghici said Francis served as a counterweight to Europe’s populists, including Mr. Salvini and Ms. Le Pen, whom he used to debate in the European Parliament. He said he came to regret engaging with them on the plight of his people, so he stopped.

“It’s better for them because it gets them more attention,” he said, adding that they brought up the Roma situation only when they were trying to attract votes. For the populists, he said, “you can’t go wrong with the Roma.”

The pope planned to end the day focused on his own flock, celebrating Mass at the Catholic Cathedral of St. Joseph.

“In a way it will be a prophetic visit,” Father Dobos said outside the church days earlier, as workers prepared for the pope’s arrival. After the European elections, he said, “There was a lot of tensions, fears. Such a visit gives us much more hope.”