UR, Iraq — First Pope Francis showed up at the modest residence of Iraq’s most reclusive, and powerful, Shiite religious cleric for a delicate and painstakingly negotiated summit. Hours later, he presided over a stage crowded with religious leaders on the windswept Plain of Ur, a vast and, now arid, expanse where the faithful believe God revealed himself to the Prophet Abraham, the patriarch of the Jewish, Christian and Muslim faiths.

In settings both intimate and theatrical, in gestures both concrete and symbolic, Pope Francis on Saturday sought to protect his persecuted flock by forging closer bonds between the Roman Catholic Church and the Muslim world, a mission that is a central theme of his papacy and of his historic trip to Iraq.

By meeting with Grand Ayatollah Ali al-Sistani in the holy city of Najaf, Francis threaded a political needle, seeking an alliance with an extraordinarily influential Shiite cleric who, unlike his Iranian counterparts, believes that religion should not govern the state.

In Ur, his speech, within view of a 4,000-year-old mud brick ziggurat with a temple dedicated to a moon god, added biblical and emotional resonance to the day.

The meetings, the church’s top officials said, were two parts of the same piece.

“Of course they go together,” Pietro Parolin, the Vatican’s secretary of state, and second highest-ranking official after the pope, said in a brief interview.

“There is a direct link with what is happening here,” he said, gesturing at the stage in Ur, “and the meeting with al-Sistani.”

Cardinal Parolin spoke as he finished a tour of the structure of what the faithful believe was Abraham’s home. Former Iraqi president Saddam Hussein had it reconstructed with new brick walls and arches.

As he moved to the stage, Francis, rode in from an airport in the provincial capital, Nasiriya, a center of ongoing antigovernment protests, past miles of blast walls, Iraqi and Vatican flags hung from barbed wire fences, and pickups loaded with soldiers and mounted machine guns. He arrived to the stage surrounded by AstroTurf and red carpets, a hastily assembled bright spot in the desert plain, and climbed to a stage.

“This blessed place brings us back to our origins,” Francis said, adding. “We seem to have returned home.” 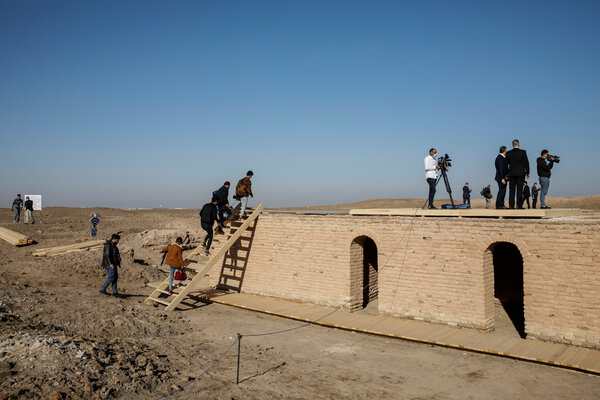 Elders from some of Iraq’s disappearing religious minorities surrounded him, some speaking of their hardships.

“I am an Iraqi Sabean Mandean who have witnessed my children, brothers, all relatives fleeing away,” said Rafah Alhilali, whose monotheistic faith shares some elements with Christianity and has St. John the Baptist as its central prophet.

Sheikh Faroq Khalil, a member of the Yazidi spiritual council, said Francis promised him he’d pray for the protection of his persecuted minority.

But some once vibrant communities had already essentially vanished from Iraq altogether, including Abraham’s Jewish descendants, and were absent from the meeting.

The Rev. Albert Hisham, the coordinator of the papal visit for Iraq’s Catholic Church, said planners had reached out to some of the dozen Iraqi Jews they could identify but got no answer.

There is a fear among many Iraqi Christians, who as recently as the mid-20th century made up about ten percent of the population, that they may face the same fate. Between 2003, the year of the U.S.-led invasion, and 2010, more than half of Iraq’s Christians left the country, leaving about 500,000 from a high of as possibly many as 1.4 million.

In 2014, the expansion of the Islamic State, or ISIS, led to more persecution and migration, and Christians today constitute little more than one percent of the population.

As strong winds across the Ur Plains lifted the red carpets in the air and blew sand over a small crowd and several empty seats, Francis made an unadulterated cry for peace and brotherly love. In doing so, he realized a dream harbored by John Paul II, who had tried to come here 20 years ago and “wept,” Francis has said, when political tensions forced him to cancel.

Francis argued that “the greatest blasphemy is to profane” God’s name “by hating our brothers and sisters.”

“Hostility, extremism and violence are not born of a religious heart: they are betrayals of religion,” he added. “We believers cannot be silent when terrorism abuses religion; indeed, we are called unambiguously to dispel all misunderstandings.”

He referred to himself and the others as “descendants of Abraham and the representatives of different religions,” and said that, like “the great Patriarch, we need to take concrete steps” toward peace.

And Francis’ confidantes say that is exactly what he has been doing.

In 2019 in Abu Dhabi, Francis signed a joint declaration on human fraternity with Sunni leaders from Al-Azhar University and Mosque in Cairo, one of the major centers of Sunni Islamic learning. His efforts to add Shiites to the equation by meeting with Ayatollah Sistani in Shia-majority Iraq upset some Sunni officials.

A senior Iraqi official said the Pope agreed to a brief meeting Friday that had not been previously scheduled with Mohammed al-Halbousi, the speaker of Iraq’s Parliament and a Sunni Muslim Arab, to assuage the concerns of many in the sect that their concerns were being ignored. t. Vatican officials on Saturday evening confirmed the meeting took place.

But it was the Shiites who were Francis’ focus Saturday and the thrust of his trip, officially themed “You Are All Brothers.”

“It is a way to find again a deep sense of unity that must exist between these three religions and of the collaboration that must be created between members of these religions,” Cardinal Parolin said.

Najaf is the site of the tomb of Imam Ali, considered by Shiite Muslims the rightful successor to the Prophet Muhammad. The shrine was closed to pilgrims for the first time in years because of the pope’s visit.

The pope walked down an alley barely wide enough for his entourage near the ayatollah’s home. Makeshift electricity lines dangled from the houses, some with windows covered by bent metal bars. There was no cheering or singing. But in many ways the meeting between Francis and Iraq’s most revered Shiite cleric was one of the most critical aspects of the pontiff’s whirlwind tour of Iraq.

The two elders, Ayatollah Sistani, 90 and clad in black robes, and Francis, 84, in his white cassock, each the highest religious authority among their followers and both in stockinged feet — sat across from one another on a small table adorned with a tissue box. Neither was pictured wearing a mask. Francis is vaccinated. Ayatollah Sistani is not. His office said he believes vaccination is religiously permitted but he did not want to jump in front of others.

The Vatican, in its statement about the meeting, said the pope had thanked the cleric “for speaking up — together with the Shiite community — in defense of those most vulnerable and persecuted amid the violence and great hardships.”

The visit signaled to Shiite Muslim leaders that Christians are to be respected.

Although Ayatollah Sistani is Iranian-born, his pronouncements on Iraq carry great weight. He has been able to set elections in motion, and his withdrawal of support for Iraq’s previous prime minister, whom he felt was failing the people, left the prime minister little choice but to resign.

Ayatollah Sistani’s 2014 religious edict urging able-bodied men to join the security forces to combat the Islamic State group resulted in a recruiting boom for Shiite militias, many closely tied to Iran. But unlike his rival, Iran’s supreme leader, Ayatollah Ali Khamenei, Ayatollah Sistani believes in a separation between politics and religion — as long as politics does not break Islamic tenets. He is in some ways an ideal interlocutor for Francis: holy, credible and powerful. His decisions carry weight.

The meeting between the two religious leaders ran longer than expected. A statement released by Ayatollah Sistani’s office said the cleric had stressed that Christian citizens deserve to “live like all Iraqis in security and peace and with full constitutional rights.”

Jason Horowitz reported from Ur, Jane Arraf from Erbil.