ABOARD THE PAPAL PLANE — Pope Francis expressed a potential willingness on Tuesday to mediate a peaceful resolution to the tense political conflict in Venezuela if asked by both President Nicolás Maduro and the opposition leader who is increasingly recognized as the country’s legitimate leader.

“We are always willing,” said Francis on the papal plane returning to Rome from Abu Dhabi, after becoming the first pope to visit the Arabian Peninsula, the birthplace of Islam.

He acknowledged that Mr. Maduro, whose government the United States and many other European countries no longer recognize, had sent him a letter, which he said he is yet to read, asking for a new dialogue.

On Monday, more countries in the European Union recognized the opposition leader, Juan Guaidó, as the legitimate interim president of Venezuela after Mr. Maduro refused to call new elections.

“There needs to be the will of both parts,” Francis said, calling mediation a final step to be taken after the completion of little steps. 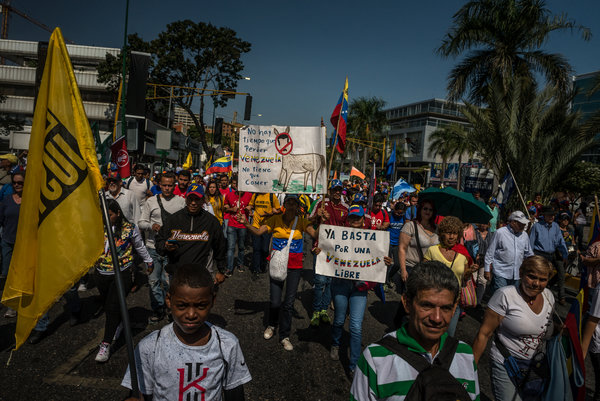 The pope recalled John Paul II’s intervention in a dispute between Argentina and Chile, which he called a “courageous” act that “avoided a war,” but suggested that the conditions for mediation had not yet been met and that a previous attempt by Vatican diplomats and European statesmen came up empty, producing only “a little mouse, nothing, smoke.”

In his in-flight news conference, which lasted about 45 minutes, Francis generally avoided specifics about his conversations with officials in the United Arab Emirates about their involvement in the war in Yemen or his efforts to tackle abuse in his church.

Asked about Yemen, where his hosts are allied with Saudi Arabia in a brutal war that has brought devastation on civilians and has starved tens of thousands of children to death, the pope said that he had the chance in his roughly 40-hour visit to broach the issue with only a few people. But, he said, he found “good will” on the part of the Emirates to “start a peace process.”

He also said he was not bemused by his hosts’ welcoming ceremony, which included jet fighters screaming overhead. “I interpret all the gestures of welcome as gestures of good will,” he said. “Everyone does it according to their culture.”

The majority of the pope’s visit was focused on interreligious dialogue with the Muslim world and it culminated with his signing a sort of manifesto for brotherhood between the faiths between himself and Ahmed Al-Tayeb, grand imam of Egypt’s influential Al-Azhar mosque.

Asked about the conservative criticism that he had been Pollyannaish in his approach to the Middle East and been taken advantage of by the Muslim sheikhs, Francis joked, “Not only the Muslims,” noting that his critics felt he had been manipulated by just about everyone.

But he said the document he signed was on strong theological footing.

“I want to say this clearly, from a Catholic point of view, the document has not moved a millimeter” from church teaching codified in the Second Vatican Council. He said he took the extra step of having the document vetted by a tough Dominican theologian in the papal household, who approved it. “It’s not a step backward,” he said. “It is a step forward.”

He also made it clear that he had continued to voice his concerns about the persecution of Christians in the region — which he said his flock knew all too well — but that either “me or another Peter,” meaning a successor pope, would surely visit more Muslim countries.

Earlier Tuesday, the pope celebrated Mass at the Zayed Sports City Stadium in Abu Dhabi before roughly 135,000 Catholics, many of them migrants from India, the Philippines and South America, who had come to the Emirates to work.

The Mass, also attended by 4,000 Muslims, was the largest public celebration of a Christian rite in the history of the Muslim country, where the worship of other faiths is tolerated but is not typically done so publicly.

The next major event on the pope’s schedule is a meeting with presidents of the world’s bishops’ conferences at the end of February in Rome to focus on a response to the global sex abuse crisis that is threatening the pope’s legacy and the moral capital that is the currency of his pontificate.

The pope is less than eager to receive questions about the issue. But he mentioned, in his positive appraisal of the United Arab Emirates, that it had held a conference last year on the protection of children from online predators. “Pedo-pornography today is a big- money industry,” the pope said.

Asked about priests sexually abusing adult nuns and religious women, reports of which had even reached the Vatican’s official newspaper, Francis said, “It’s true.” He said that inside the church “there are priests and bishop who have done that,” adding that it was a continuing problem.

He said that the Vatican was working on the issue and had suspended some priests, but he failed to say whether any concrete responses were in the offing. “Should more be done? Yes,’’ Francis said. ‘‘Do we have the will? Yes. But it is a long journey.”

In answering the question, Francis recalled that his predecessor, Benedict XVI, was “a strong man” who he said had sought to remove examples of sexual abuse and even slavery by priests.

Pope John Paul II was apparently less than heroic on the issue. Francis told a story about how Benedict, then known as Cardinal Joseph Ratzinger, when he was the church’s chief doctrinal watchdog, sought to disband a religious order, apparently The Legionaries of Christ, which was riddled with sexual and economic corruption.

Francis recounted that Benedict was called to a meeting on the issue and brought all his files. “When he came back he told his secretary, ‘Put them in the archive. The other side won,’ ” Francis said, adding, “We should not be scandalized by this — it’s part of a process.”

He said that when Benedict became pope he immediately told his secretary to get him the files “and let’s start again.”

Francis said that he, too, wanted to move forward on the issue of the clerical abuse of nuns. “We’re working on it.”

How Prince Andrew brutally snubbed Queen: ‘Can’t you talk about anything else?’
Asia