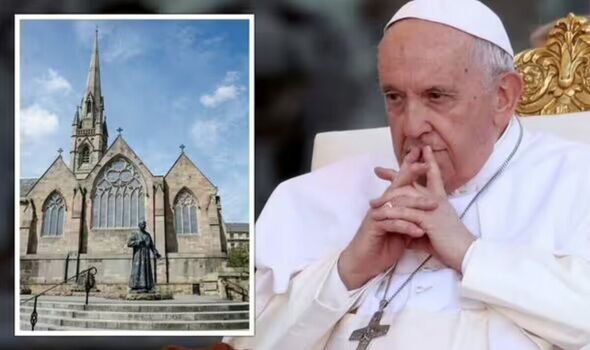 The Archbishop of Liverpool, who is leading the investigation, has been asked to prepare “an in-depth report into the events leading up to the resignation”.

There is no suggestion that Bishop Byrne was at the alleged party or was aware of it.

But during lockdown, Father Michael McCoy, who was the dean at the time, reportedly asked several worshippers if they would like to attend a “sex party” inside a property adjoining St Mary’s Cathedral, Newcastle.

A diocese source told The Sunday Times: “A number of complaints were made by individuals within the diocese after information came to light about a sex party taking place in the priests’ living quarters attached to Newcastle cathedral.”

A second church source said: “The cathedral had become a laughing stock.”

When the bishop stepped down, he told worshippers that he had been reflecting on “what does the Lord require of me?” and decided the role had become “too great a burden”.

A few months after he was made bishop in 2019, he surprised worshippers by replacing the hugely popular Father Dermott Donnelly, the older brother of TV presenter Declan Donnelly, with another priest, Father Michael McCoy.

McCoy, 57, took his own life in April 2021, four days after finding out he was being investigated by Northumbria police’s child and adult protection department after a historical child sex abuse allegation against him.

A separate investigation, by the Catholic Safeguarding Standards Agency (CSSA) will focus on the convicted sex offender Father Tim Gardner, and his relationship with the diocese.

Gardner, 42 at the time, was sentenced to eight months in prison, suspended for two years. He is alleged to have been offered the chance to stay at church-owned accommodation in the Newcastle diocese after his conviction. Senior figures at the diocese stepped in to block it, it is alleged.

A Hexham and Newcastle diocese spokesman said the diocese had “previously invited” the CSSA to conduct a review “following the resignation of Bishop Byrne in December 2022”.

“The review is now under way. Prior to Bishop Byrne’s resignation in mid-December, trustees were working with the Charity Commission, following their self-referral to that organisation.”

A Charity Commission spokeswoman said: “A charity should be a safe and trusted environment. As regulator, we are clear that keeping people safe should be a priority for all charities.”