The divergence of the conservative American church from Francis’ agenda is now so obvious as to be unremarkable, even when U.S. bishops ignore a Vatican warning.

VATICAN CITY — Pope Francis on Saturday put a founder of the European Union on the track to sainthood, told Roman deacons to take care of the poor and met with a top prelate who once defended him against wild allegations by the Vatican’s former ambassador to the United States.

But the most telling thing he did was stay quiet about the extraordinary vote by America’s Roman Catholic bishops to move ahead — despite the warning of the pope’s top doctrinal official — with the drafting of new guidance that conservatives hope will eventually deny communion to President Biden for his support of abortion rights.

The pope said nothing, church officials and experts said, because there is nothing else to say.

The divergence of the conservative American church from Francis’ agenda is now so apparent as to become unremarkable, and Vatican officials and experts said Saturday that the pope’s silence also underlined just how unsurprising the American vote, made public on Friday, was to the Vatican. 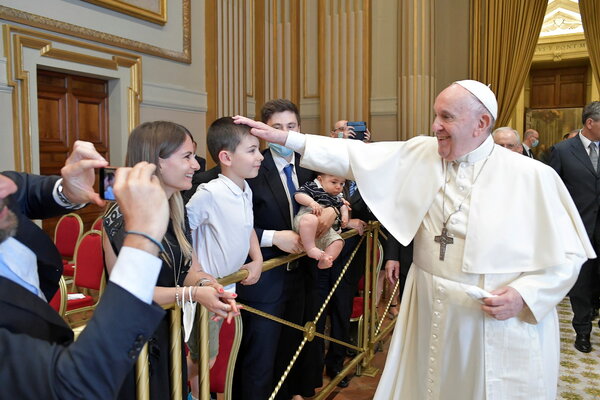 The deeply conservative American bishops conference has already flouted a remarkably explicit letter from the Vatican in May urging it to avoid the vote. It has disregarded years of the pope’s pleas to de-emphasize culture war issues and expand the scope of its mission to climate change, migration and poverty.

On Friday, the United States Conference of Catholic Bishops voted in a large majority at an often bitter virtual meeting to begin drafting guidance on the sacrament of the Eucharist. That guidance could become a vehicle for conservative leaders in the U.S. church to push for denying communion to prominent Catholics like Mr. Biden who support abortion rights.

But the public silence at the Vatican on Saturday, the officials said, also reflected that the pope and his top officials remained confident that the American conservatives would never actually pass such a doctrinal declaration on banning communion.

Church law says for that to happen, the bishops’ conference would need either unanimous support, which is essentially impossible, or two-thirds support and the Vatican’s approval.

“It’s not going to get to that point,” said one senior Vatican official with knowledge of the thinking inside the Congregation for the Doctrine of the Faith, the church’s doctrinal watchdog. “It’s inconceivable.”

President Biden, when asked about the vote yesterday, had a similar view.

“That’s a private matter,” he told reporters. “And I don’t think that’s going to happen.”

Britons back Queen after she BLOCKED Harry and Meghan’s Sussex Royal brand – ‘Checkmate!’