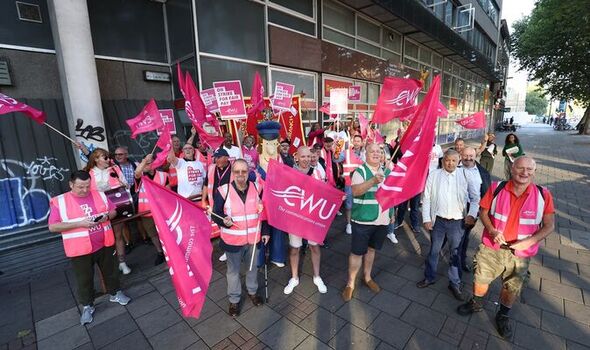 Dave Ward, general secretary of the Communications Workers Union, said his members voted in favour of the strike by 97.6 percent, after management “imposed” a two percent pay rise on employees but “rewarded themselves with record bonuses”. Further stoppages are planned for Wednesday, then Thursday, September 8 and Friday, September 9.

Scores of CWU members, including Mr Ward and a person in a Postman Pat costume, manned a picket line in east London.

One man shouted: “Enough is enough. Millions for the bosses. Pennies for the workers.”

Mr Ward said: “This is the biggest strike in the UK since 2009. We have got over 115,000 members who are out on strike today after delivering a massive ‘yes’ vote.

“And it’s over pay. Our members just lost total confidence in the actions of the company.”

He added: “The company made record profits last year – £758million. They gave away over £400million to shareholders, they rewarded themselves with record bonuses and then imposed a two percent pay increase on postal workers.

“Against the background of rocketing inflation, rocketing energy bills, it’s simply not acceptable.

“Postal workers in the UK are one of the last remaining pillars of our society.

“We are going to fight hard to get our members the pay deal that they deserve.”

Simon Thompson, Royal Mail CEO, denied the accusation that money from the company has been handed to shareholders, saying the Covid-19 “bubble has burst”.

“I would also just like to make it clear that over the last three years we spent £900million on our team’s future by building infrastructure for parcels so that we can compete and win in the market.

“But our reality is that the Covid bubble has burst and we can see the economic situation around us all.

“Our reality today is we are losing £1million a day.”

Mr Thompson said he was open to talks with unions “as long as that discussion is going to be around change”.

He apologised to customers for a “disrupted service” during the strike but stressed change was necessary for the company.

The CEO added: “What is actually on the table is 5.5 percent, which would cost us around £230million.”

He went on: “We do need the change, to pay for that pay, because of our financial situation.”

Royal Mail has said the union had rejected the pay rise offer “worth up to 5.5 percent” after three months of talks.

But the CWU called the figure “a blatant lie”.