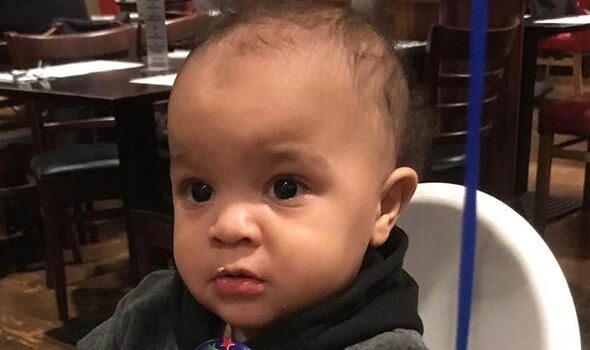 A postman who killed his girlfriend’s 18-month-old son after a series of assaults has been jailed for nine years. Devout Christian Scott Coombe repeatedly caused bruises and minor injuries to Andrew Cawker before losing “control” and killing him on July 22 2019.

The 24-year-old, of Petts Wood, south-east London, had been “besotted” with the child’s mother Tamika Beaton but struggled to cope, the Old Bailey heard.

Initially, the couple had wrongly blamed Andrew’s injuries on his father Ben Cawker and on the child’s “clumsy” nature.

Baby Andrew died after he was vigorously shaken and thrown by Coombe, who had become “irritated” with caring for him while Beaton attended a dance class in July 2019.

He never regained consciousness after his head hit the floor and he died in hospital 13 days later.

Following his death, Coombe even claimed he had raised concern with his brother, who was a serving police officer.

The 25-year-old from Peckham, south-east London, was found guilty of child cruelty by wilful neglect following a trial.

He sentenced Beaton to 12 months in custody suspended for 18 months.

The judge acknowledged Coombe’s expression of remorse and written apology to Mr Cawker, but said he could not ignore the “aggravating factor of casting suspicion on others”.

He said Andrew’s father, who was not in court, had faced a “nightmare scenario of having his son killed and having some stain cast on him”.

He said: “I was struck by him, the way he gave evidence. He is someone who bears no responsibility for what happened to his son.”

The judge noted Coombe was working full-time as well as taking on domestic chores and childcare.

Andrew was said to be a “boisterous child” with difficulty sleeping and high levels of energy who could be demanding, he said.

But the judge said that these circumstances were not uncommon in parenthood.

On the seriousness of the offence, he told Coombe: “There is a clear history of violence or abuse towards Andrew by you.

“Andrew was particularly vulnerable because of his age. There was also the abuse of a position of trust.”

He told Beaton: “It is clear to me you were fully aware of the injuries to Andrew. There was no adequate explanation for them.”

At the trial, the prosecutor said Coombe had admitted manslaughter on the basis that he became irritated, picked the child up and “in a moment of anger and frustration, shook him vigorously backwards and forwards briefly and then threw him backwards”.

A post-mortem concluded Andrew had died as a result of a head injury, but a number of other bruises were found around his face and shoulder.

The pathologist remarked that, given the level of injuries, the account given by Coombe as to how they were sustained was “implausible”.

Outlining the fatal assault, prosecutor Sally O’Neill KC had said: “On July 9 2019 she had gone to a dance class, leaving Scott Coombe in charge of Andrew, knowing that he had done a full day’s work as a postman.

“He was willing to look after Andrew but the risks of allowing him to do so must have been obvious to Tamika Beaton, and she chose to disregard them as she had done on a number of previous occasions.”

Coombe became “irritated”, leading to him shaking and throwing Andrew down, jurors heard.

The child hit his head on the floor and never regained consciousness.

In a 999 call, Coombe told emergency workers the child had started “looking a bit stiff” and collapsed while playing.

Andrew was taken to hospital where he died from head injuries days later.

Previously, the court had heard how Beaton had put her own interests before those of her son with “catastrophic” consequences.

Beaton had begun cheating on Mr Cawker after meeting Coombe at a fitness class while trying to lose weight after Andrew’s birth.

She had confirmed her relationship with Coombe by December 2018 and by March the following year Andrew began to show “regular bruising”, the court was told.

As the incidents continued, Beaton made insinuations to her former partner, Andrew’s father, that the injuries could have been caused by him while he was looking after the toddler.

She repeated these accusations when interviewed by police, despite knowing that the injuries had been sustained when Andrew was being looked after by Coombe.

Beaton also indicated that she was aware that Andrew was being abused by Coombe in messages sent to her mother.

However, she chose not to take action but instead allowed the abuse to continue.

Before the tragic incident, it was clear to Beaton that Andrew had “unexplained injuries” while in Coombe’s care at the flat in East Dulwich where she was living at the time, the court had heard.

Ms O’Neill said: “She was putting her own interests before those of Andrew – with the most catastrophic consequences for Andrew.”

In mitigation, Paul Mendelle KC said Coombe had been “besotted” with Beaton and made “considerable efforts” to provide for the family, despite his young age and lack of experience in looking after young children.

In an unusual move, an older prisoner at Belmarsh prison, to whom Coombe has acted as carer, submitted a handwritten letter to the court.

In it, he wrote: “He does my washing and cleans the prison. Whatever mistake he has made, in my opinion he has made my life so much better.”

Detective Sergeant Quinn Cutler, a homicide detective, led the investigation and previously said: “This is an utterly heart-breaking case where a defenceless child has sustained prolonged abuse at the hands of those who should have been caring for him, resulting in his death.

“Andrew should have been in the place where he felt safe; at home with his mother and her partner.

“However, over the course of a year, Andrew suffered regular assaults at the hands of Scott Coombe culminating in the attack on 9 July 2019 which proved to be fatal.

His mother, Tamika Beaton, clearly suspected Coombe was responsible for these injuries but chose not to intervene or seek help.

“Indeed, when questioned by police she sought to place the blame on another man.

“While Beaton did not directly inflict injuries on her son, her inaction most certainly played a part in his death.”

How many General Election candidates have been caught saying something bad?