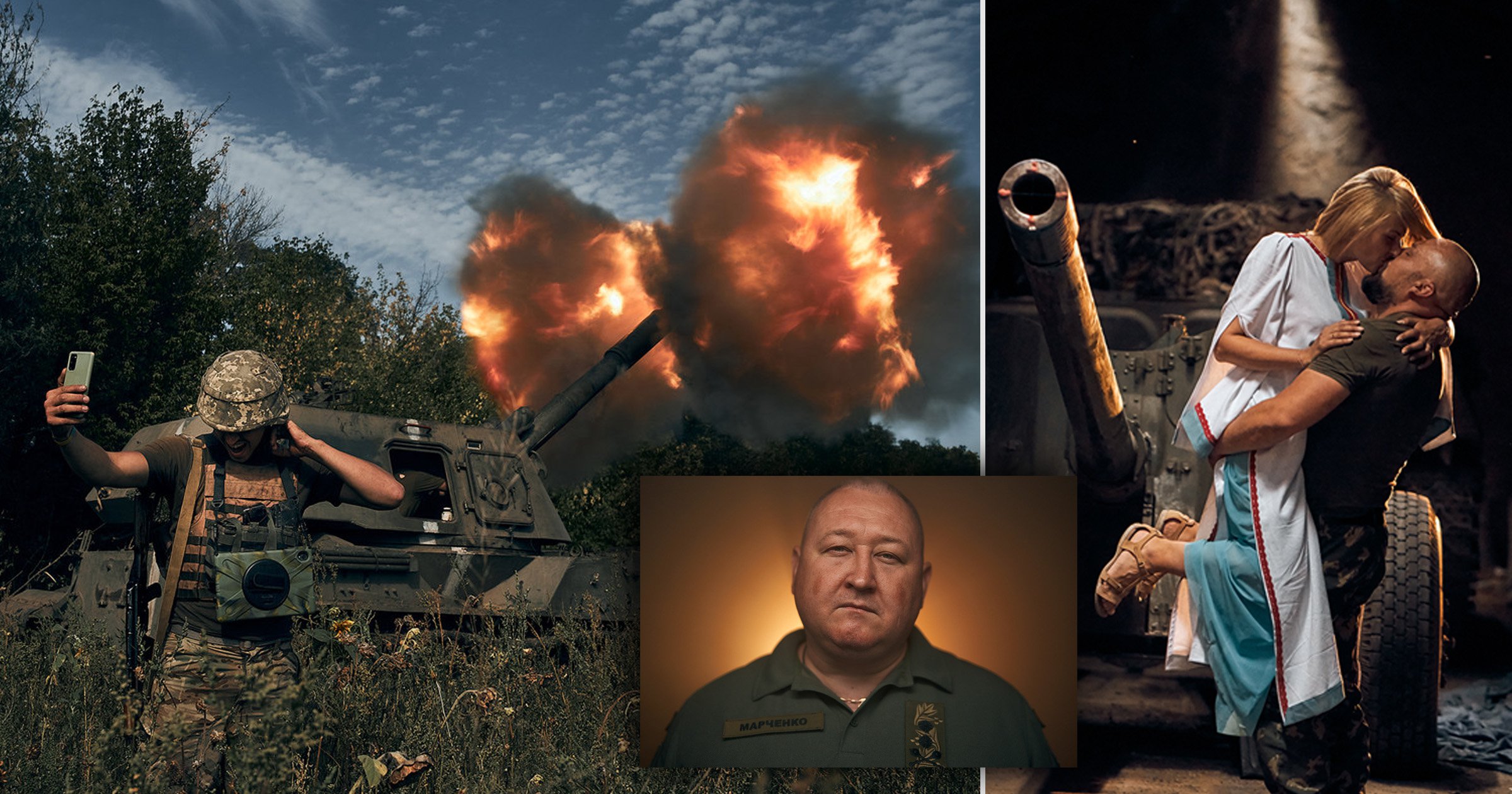 A collection of powerful images tell some of the personal stories of the Ukraine war and open a window into the lives of those caught up in the conflict.

A frontline wedding between a couple named as Alla and Oleksandr is among the wartime moments captured by Kostiantyn and Vlada Liberov.

The bride surprised her ‘everything’ on his birthday at the military position by waking the soldier up before the ceremony was conducted by a priest at a local church.

His comrades, still in military gear, watched on as the couple took their vows in an ‘incredible’ moment that came amid the unit’s fight against Russian invasion forces.

She later joined her new husband at the unspecified area and wants to enrol in the armed forces of Ukraine to be by his side, the Liberovs say on their website.

The photographers describe the marriage, during which Alla tried out an anti-tank weapon, as ‘another incredible love story born out of this terrible war’.

In a card to her love, Alla wrote: ‘You are my everything, you are my life.’

In another impactful image, a soldier takes a selfie while a rocket explodes into the sky behind him.

Showing the now everyday nature of war, a comrade in another picture holds a watermelon and gives a thumbs-up as another missile bursts into the heavens.

The loss, brutality and cruelty of the full-blown invasion is also captured by the couple, who have gained the trust of their military and humanitarian contacts.

In another image that suspends time, two fighter jets carry out a fly-past at a funeral for a military pilot in the central city of Vinnitsya around a month into the war.

In war-ravaged Irpin, the fear, shock and relief on casualties’ faces is captured as they are stretchered out in an evacuation that took place at the start of April.

The horrific aftermath of Russia’s brutal occupation of population settlements to the north of Kyiv, including Irpin and Bucha, is also documented by the photojournalists.

A body is shown covered with rags in a wood as forensic work takes place by a team wearing bio-hazard suits in one of the hero cities, which are synonymous with Russian war crimes.

Despair at the destruction wrought by Moscow’s forces is shown etched on the face of a man standing in the ruins of his house in a village near Avdeevka in the eastern Donbass region.

But the hope and grit of the Ukrainians is also given lucid form.

General Dymtro Marchenko, who has defended Ukraine since 2014 in battles such as the defence of Donetsk Airport, is shown full of resolve as he was photographed by the couple.

Kostiantyn and Vlada have used their extensive network of contacts across the country to gain intimate access to people’s lives and frontline areas off-bounds to other media.

Travelling widely, they have taken images in Kharkiv, Severodonetsk, Lysychansk, Mykolaiv and many small towns that have come under daily shelling from Russian forces.

Pictures by the Liberovs – along with others taken by photographers covering the war in Ukraine – will be displayed at an outdoor rally in Manchester on Saturday.

The collection of around 20 large pictures include unfiltered images documenting the torture and killing of civilians by Russian troops and their proxy forces.

Alina Kostrubitska, 32, a refugee who was a wedding host and television journalist in Kyiv, is one of the organisers with the Manchester Ukrainian community.

Alina, who is staying with a British host family in the city, told Metro.co.uk that the rallies take place every Saturday, with this week’s event including a photo exhibition where people will hold up the large pictures by the Liberovs and others along the route to Piccadilly Gardens.

‘We want to send out the message that this is our tragedy and we don’t want the world to turn the page and forget about the war,’ she said. ‘Ukrainians can’t turn the page because this is our lives, in our homes, with the pictures showing the cruelty of Russia, the terrorist and the aggressor.

‘The message is that the war is not over.’

‘I know Kostiantyn from Ukraine through his work as a wedding photographer.

‘When he decided to take photographs of the war we were impressed by his bravery and his powerful images not just being about the events but being about people, stories and emotion.

‘My opinion is that you can look into people’s souls through his photos.’

The rally takes place as part of the #manchesterstandswithukraine campaign and also includes work by Yevhenii Zavhorodny from Ukraine and Dmytro Kotyukh from Estonia.

One of the aims is to make sure the world continues to see the full reality of the war.

Alina told Metro.co.uk that Instagram and Facebook have removed photographs documenting the aftermath of the Russian brutality.

In a message sent via the organisers, the Liberovs said: “The war in Ukraine is not sensitive content.

‘This is reality. And we have to talk about it so loud and so long until we get enough attention.

‘Because yes, attention, unfortunately, is still not enough.

‘Until all our lands are liberated and our boys and girls return home alive, nothing will ever be enough.’