Home » Europe » Powerful Men Fall, One After Another, in France’s Delayed #MeToo

PARIS — When Sandra Muller launched France’s #MeToo social media campaign in 2017, tens of thousands of women responded to her calls to “Expose Your Pig,” or #balancetonporc.”

But the backlash was overwhelming. Some of the most prominent women in the country, led by Catherine Deneuve, denounced the movement in a letter that came to define France’s initial response to #MeToo. In 2019, Ms. Muller lost a defamation case against a former television executive she had exposed on Twitter, with France appearing immune to the larger global forces challenging the dominance of men.

Last week, Ms. Muller won her appeal. Though there were no new facts, a powerful ruling by the appeals court underscored how things have changed in the past two years.

“Before the ruling, I thought there were stirrings,” Ms. Muller said in a phone interview from New York, where she now lives. “Now, I have the impression that there’s been a leap forward.”

Since the beginning of the year, a series of powerful men from some of France’s most prominent fields — politics, sports, the news media, academia and the arts — have faced direct and public accusations of sexual abuse in a reversal from mostly years of silence. At the same time, confronted with these high-profile cases and a shift in public opinion, French lawmakers are hurrying to set 15 as the age of sexual consent — only three years after rejecting such a law.

The recent accusations have not only led to official investigations, the loss of positions for some powerful men and outright banishment from public life for others. They have also resulted in a rethinking of French masculinity and of the archetype of Frenchmen as irresistible seducers — as part of a broader questioning of many aspects of French society and amid a conservative backlash against ideas on gender, race and postcolonialism supposedly imported from American universities. 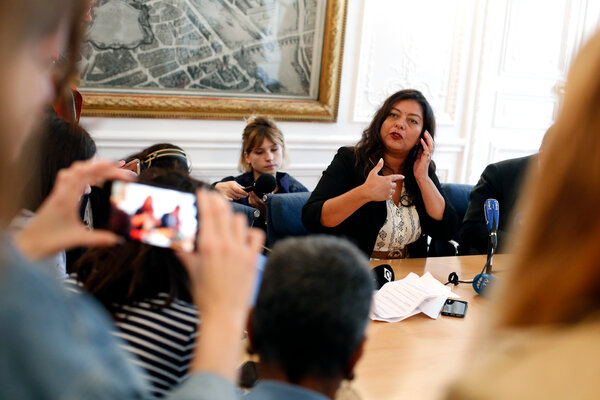 “Things are moving so fast that sometimes my head spins,” said Caroline De Haas, a feminist activist who in 2018 founded #NousToutes, a group against sexual violence. She described herself as “super optimistic.”

Ms. Haas said that France was going through a delayed reaction to #MeToo after a “maturation” period during which many French began to understand the social dimensions behind sexual violence and the concept of consent.

That was especially so, Ms. Haas said, after the testimony in the past year of Adèle Haenel, the first high-profile actress to speak out over abuse, and of Vanessa Springora, whose memoir, “Consent,” documented her abuse by the pedophile writer Gabriel Matzneff.

“The start of 2021 has been a sort of aftershock,” Ms. Haas said. “What’s very clear is that, today in France, we don’t at all have the same reaction that we did four, five years ago to testimonies of sexual violence against well-known people.”

Last month, Pierre Ménès, one of France’s most famous television sports journalists, was suspended indefinitely by his employer after the release of a documentary that exposed sexism in sports journalism, “I’m Not a Slut, I’m a Journalist.”

Just a few years ago, few criticized him for behavior that they now don’t dare defend in public, including forcibly kissing women on the mouth on television and, in front of a studio audience in 2016, lifting the skirt of a female journalist — Marie Portolano, the producer of the documentary.

“The world’s changed, it’s #MeToo, you can’t do anything anymore, you can’t say anything anymore,” Mr. Ménès said in a television interview after the documentary’s release. He said he didn’t remember the skirt incident, adding that he wasn’t feeling like himself at the time because of a physical illness.

The list of other powerful men is long and getting longer. There is Patrick Poivre d’Arvor, France’s most famous news anchor, who is being investigated for rape of a young woman and who defended himself on television by saying that he belonged to a generation for whom “seduction was important” and included “kisses on the neck.” He has denied the rape accusations.

There is Georges Tron, a former government minister, who was cleared in 2018 for raping an employee but was condemned in February to five years in prison in an appeals court ruling that, according to Le Monde, reflected the fact that society’s “understanding of consent has unquestionably changed.”

There is Gérard Depardieu, France’s biggest film star, and Gérald Darmanin, the powerful interior minister, also under investigation in rape cases that were reopened last year. Both have said they are innocent.

Olivier Duhamel, a prominent intellectual, and Richard Berry, a famous actor, have both been recently placed under investigation after accusations of incest by family members. Mr. Berry has denied the accusations; Mr. Duhamel has not commented on the charges against him.

Claude Lévêque, the internationally known artist, is under investigation for rape of minors and was publicly accused for the first time in January by a former victim. He has denied the accusations.

Dominique Boutonnat, a movie producer whom President Emmanuel Macron named president of the National Center for Cinema last year, was placed under investigation in February for attempted rape and sexual assault of his godson and has said he is innocent.

“This recent wave in France, it’s a delayed reaction to the Matzneff affair,” Francis Szpiner, the lawyer representing Ms. Muller, said, adding that the downfall of the pedophile writer and of Mr. Duhamel made people realize that powerful men in France were not “untouchable.”

In 2017, in the immediate aftermath of the #MeToo disclosures involving the Hollywood mogul Harvey Weinstein, Ms. Muller, a journalist, launched #balancetonporc in France. In a Twitter post, she recounted how during a television festival in Cannes, an executive told her, “You have big breasts. You are my type of woman. I will make you orgasm all night.”

The executive, Eric Brion, did not deny making such comments. But because the two did not work together, Mr. Brion argued the comments did not amount to sexual harassment and sued Ms. Muller for defamation. A ruling in 2019 that ordered Ms. Muller to pay 15,000 euros in damages, around $17,650, was overturned last week.

In 2019, the court said that Ms. Muller had “surpassed the acceptable limits of freedom of expression, as her comments descended into a personal attack.” This time, the judges found that Ms. Muller had acted in good faith, adding that the “#balancetonporc and #MeToo movements had drawn a lot of attention, had been hailed by diverse officials and personalities and had positively contributed to letting women speak freely.”

Camille Froidevaux-Metterie, a leading feminist philosopher, said that it was significant that the men now under investigation were leaders in a diversity of fields. Revelations surrounding them have undermined the myths of Frenchmen as great seducers and of a refined romantic culture where “we, French, in our interplay of seduction, know how to interpret nonverbal signs and we have this art of seduction, a gentle commerce between the sexes,” she said.

“These are men who all embody, in some ways, the old patriarchal order of things — of men of power and men who have used and abused their power to sexually exploit the bodies of others, whether they be women or young men,” Ms. Froidevaux-Metterie said, adding, “Perhaps we are experiencing the first real shock to that system.”

Some conservative intellectuals regard the ever-growing list of accused prominent men as evidence of the contamination of French society by American ideas on gender, race, religion and postcolonialism.

Pierre-André Taguieff, a historian and a leading critic of the American influence, said in an email that “neo-feminist and neo-antiracist ideologues denounce universalism, especially French republican universalism, as a fraud, a deceitful mask of imperialism, sexism and racism.”

Though Mr. Taguieff did not comment on the specifics of the recent cases, he said that this new wave of #MeToo represents a “misandrist and androphobic sexism that encourages a witch hunt of white men selected on the basis of their fame or renown, in order to fuel social envy and resentment of white/masculine elites.” Mr. Taguieff recently helped found “The decolonialism watchdog,” a group leading the charge against what it describes as the intellectual threat from the United States.

France’s initial reaction to #MeToo was to reject it as an American distortion of feminism, the same way French conservatives are now trying to dismiss ideas on race and racism as irrelevant American concepts, said Raphaël Liogier, a French sociologist who teaches at Sciences Po Aix-en-Provence and who was recently a visiting scholar at Columbia.

As Ms. Deneuve and other women in 2017 denounced #MeToo as a product of “puritanism” and a threat to “sexual freedom,” conservatives pushed back by arguing that American women were sexually repressed and actually less free than Frenchwomen, Mr. Liogier said.