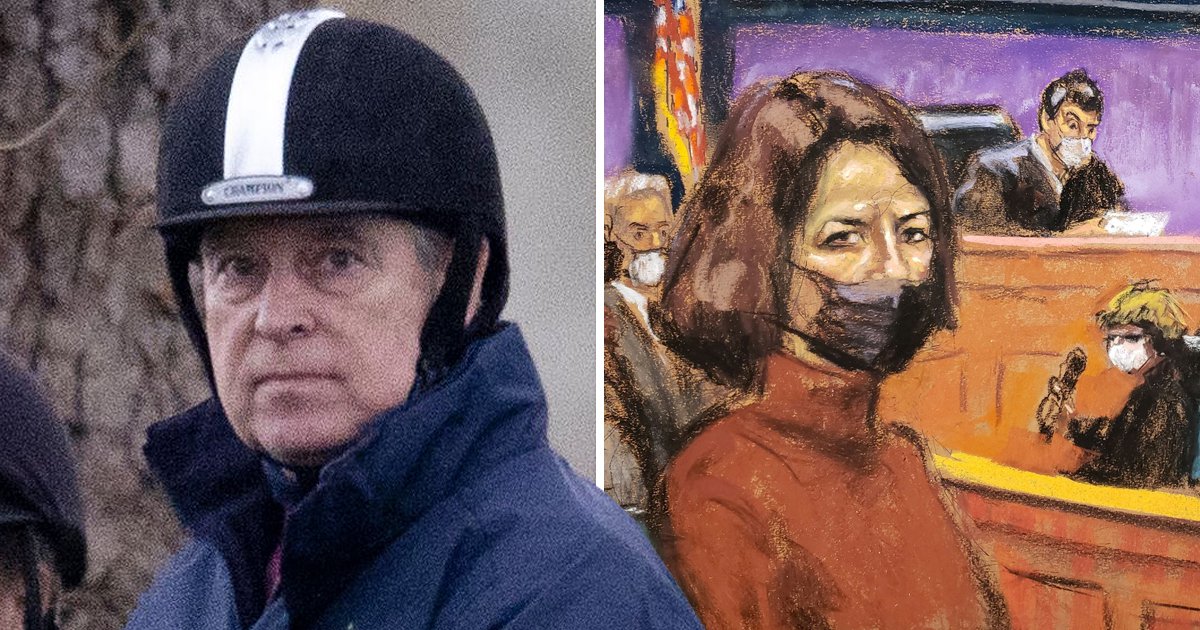 Prince Andrew is reportedly holed up alone in Windsor Castle with his family off skiing without him after his friend Ghislaine Maxwell was found guilty of sex trafficking.

Maxwell, a longtime associate of sex offender Jeffrey Epstein, was found guilty on Wednesday of sex-trafficking young girls for the billionaire to abuse.

The Duke of York has also been accused of being involved in Epstein’s criminal activities, with Virginia Roberts, also known as Guiffre, claiming she was forced to have sex with Andrew

Andrew, 61, has categorically denied he had any form of sexual contact or relationship with Ms Roberts.

On Tuesday, a New York Court will decide if Ms Robert’s civil lawsuit against him can proceed to trial.

Following Maxwell’s guilty verdict, victims of her and Epstein’s abuse have said Andrew should face investigation.

Chauntae Davies said of Andrew: ‘He could be feeling very, very uncomfortable right about now.’

While Jennifer Araoz, a victim of Epstein’s, said the Duke ‘needs to be investigated’.

‘The authorities should have been investigating other people a long time ago,’ she told The Sun.

‘Prince Andrew needs to be investigated for any women who were involved with him.

‘The TV interview he had to “prove his innocence” didn’t come across very well in my opinion.’

While Ms Roberts has said that in the wake of Maxwell’s verdict she intends to pursue others.

In a series of tweets, she said: ‘I hope that today is not the end but rather another step in justice being served.

‘Maxwell did not act alone. Others must be held accountable. I have faith that they will be.’

Prince Andrew is reportedly currently holed up in Windsor Castle alone after his former wife and daughters jetted off for a ski break without him.

But sources close to the Duke said he remains defiant.

A friend of Andrew’s told The Sun: ‘This was Ghislaine Maxwell’s trial, not the Duke’s.

‘Nothing new of any substance has been raised in relation to the Duke.

‘Any mentions have been glancing blows, not body blows.’

Next week will see the start of a pivotal period for Andrew in his battle to clear his name.

Lisa Bloom, a lawyer who has represented some of Epstein’s victims, said following Maxwell’s case Andrew ‘should be quaking in his royal boots’.

She has also said the guilty verdict has left the Duke in a position where he is now ‘a self-confessed friend of a child sex trafficker.’

There has also been speculation Maxwell, who faces the prospect of spending the rest of her life behind bars, may try to lessen her sentence by ‘naming names’ of others involved in Epstein’s activities.

Andrew is one of the most high-profile figures accused of crimes connected to Epstein and Maxwell but has always strenuously denied any wrongdoing.

On Tuesday judges will decide if Roberts civil case against him can go to trial.

Andrew’s legal team claim that because Roberts now lives in Australia she is not eligible to pursue a legal case through the US court.

In documents filed in the Southern District Court of New York earlier this week, legal representative Andrew B Brettler said the case should be halted until the ‘issue of subject matter jurisdiction is adjudicated’.

Food with a view: Takeaway truck listed in book of 'best in the world'