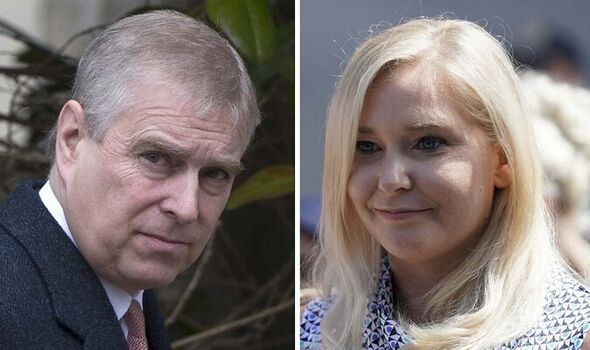 But the shamed Duke will never return to his former Royal duties.

Prince Andrew has been told he has no future in public life after reaching an out-of-court settlement yesterday with Virginia Giuffre.

The Duke of York agreed to a pay a substantial undisclosed sum to stave off a civil court case in New York brought by the woman who claims she was forced to have sex with him three times when she was as young as 17 and trafficked around the world by her bosses Jeffrey Epstein and Ghislaine Maxwell.

Their settlement was outlined in a letter filed to a court in New York yesterday, amid claims that Andrew 61, has agreed a payoff worth £7.5 million.

Legal experts said it was the best of a bad bunch of options for Andrew, who was stripped of his remaining military affilations and royal patronages last month by the Queen, who wanted to distance the institution of monarchy from the scandal engulfing her second son and free him up to handle the case how he sought fit.

Buckingham Palace declined to discuss the settlement but, although it protects the Queen from embarassing details coming out in court during her Platinum Jubilee, it is not expected to lead to a reprieve for Andrew. Prince Charles and the Duke of Cambridge have made it clear they see no future for him in the working Royal Family and royal sources last night insisted the decision to strip Andrew of all his royal roles would still stand.

But sources close to Charles were adamant that he did not force Andrew to settle. “It was all about freeing him up to make his own decision,” said one.

Under the settlement, Andrew has agreed to make a “substantial donation” to Ms Giuffre’s charity for victims of sex trafficking. He has also said he never intended to malign her character and regrets his association with Epstein, a convicted paedophile.

The agreement states he has pledged to “demonstrate his regret for his association with Epstein” by supporting the “fight against the evils of sex trafficking, and by supporting its victims”.

But the agreement is not a formal admission of wrongdoing by Andrew, who has always strenuously denied the allegations against him.

An attachment to the letter announcing the settlement gave brief details of the agreement between Andrew and Ms Giuffre but indicated the sum would not be disclosed.

It read: “Virginia Giuffre and Prince Andrew have reached an out of court settlement.

“The parties will file a stipulated dismissal upon Ms Giuffre’s receipt of the settlement (the sum of which is not being disclosed).

But the agreement is not a formal admission of wrongdoing by Andrew, who has always strenuously denied the allegations against him.

An attachment to the letter announcing the settlement gave brief details of the agreement between Andrew and Ms Giuffre but indicated the sum would not be disclosed.

It read: “Virginia Giuffre and Prince Andrew have reached an out of court settlement.

“Prince Andrew has never intended to malign Ms Giuffre’s character, and he accepts that she has suffered both as an established victim of abuse and as a result of unfair public attacks.

“It is known that Jeffrey Epstein trafficked countless young girls over many years.

“Prince Andrew regrets his association with Epstein, and commends the bravery of Ms Giuffre and other survivors in standing up for themselves and others.

“He pledges to demonstrate his regret for his association with Epstein by supporting the fight against the evils of sex trafficking, and by supporting its victims.”

Responding to the settlement, one of Ms Giuffre’s lawyers, David Boies, said: “I believe this event speaks for itself.”

Sigrid McCawley, who also represents Ms Giuffre, added: “As a managing partner at a firm that has from its beginning acted upon the belief that the law should be marshalled to bring justice to the most vulnerable, I can say, without hesitation, that our representation of survivors upholds that tradition.

“I am very pleased with the resolution of Virginia Giuffre’s litigation against Prince Andrew.”

In January Andrew’s lawyers submitted 11 reasons why the case against him should be dismissed and insisted he demanded a trial by jury. His lawyers painted Ms Giuffre as someone who recruited other girls to work for Epstein and suggested that she might be suffering from false memory syndrome in describing him abusing her.

Royal biographer Penny Junor noted the dramatic change in tone and said the settlement would come as a “huge relief” to the rest of the Royal Family by removing the threat of the trial hanging over the Queen’s jubilee. “At last, he’s expressing some regret and some empathy for those girls,” she said.

Mark Stephens, a media lawyer, agreed that the deal would protect the wider Royal Family from fallout over the case.

“With this settlement, he has prevented this court case overshadowing the tributes and acknowledgement of the Queen’s 70 years of selfless sacrifice and service to the country,” he said.

“And whilst he is reputationally toast and will never appear on a royal balcony ever again and has effectively been airbrushed from polite society and the Royal Family, he does prevent wider problems for the Royal Family.”

Dickie Arbiter, a former Palace press secretary to the Queen, suggested Andrew would never recover his reputation. “If he has professed his innocence all along, why has he now settled?” he wondered.

Euro 2020: Despite plea to stay away, up to 20,000 Scotland fans set to go to London for England game tonight