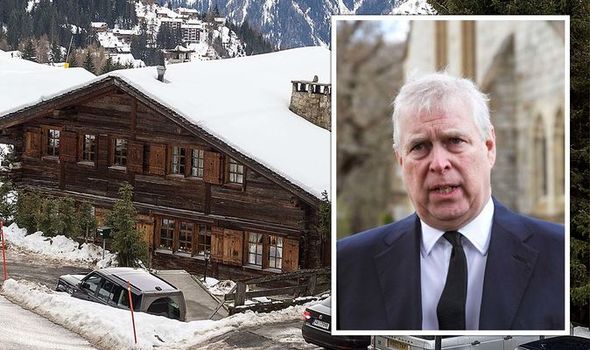 The Duke of York is attempting to speed up the sale of the property in case he has pay a multi-million pound settlement to his sex abuse accuser.

Virginia Giuffre is suing Andrew in the US for allegedly sexually assaulting her when she was 17. The prince has consistently denied these allegations.

Judge Lewis Kaplan could reveal today whether or not Andrew will face a full civil trial in New York. Sources have said the Duke realises a trial could cause catastrophic reputational damage to the monarchy.

If the case does go to trial and Andrew loses, Ms. Giuffre could be awarded as much as £3million. The Queen “would not assist” in any financial settlement to Ms Giuffre.

Senior royals, including Prince Charles and Prince Wlliam, were allegedly “furious” at suggestions Her Majesty could be asked to settle Andrew’s legal bills.

A source said: “They are both of the opinion Andrew can sort out his own mess.”

Andrew, 61, bought the seven-bedroom Chalet Helora with his ex-wife Sarah Ferguson, 62, for £16.6million in 2014. It sits in the luxury Swiss resort of Verbier and is understood to be his only way of raising large amounts of cash.

The pair agreed to sell it to a European investor in September. But the deal is yet to be completed, despite the Duke “urgently” attempting to force it through.

The Duke is determined to “clear his name” and has promised lawyers he will pay their fees when the sale of the property is completed and there is a resolution to his case.

However, those with knowledge of the case have said an 11th hour out-of-court settlement could be an option – although no discussions about that “have been had”.

A source said: “It is crunch time for Andrew on several fronts. He is meeting all the costs himself so he needs to raise cash fast to pay bills that are increasing by the day.

“If there was the potential to settle, well, that is an option that could be considered. But it is in no doubt that the Queen would not assist him.”