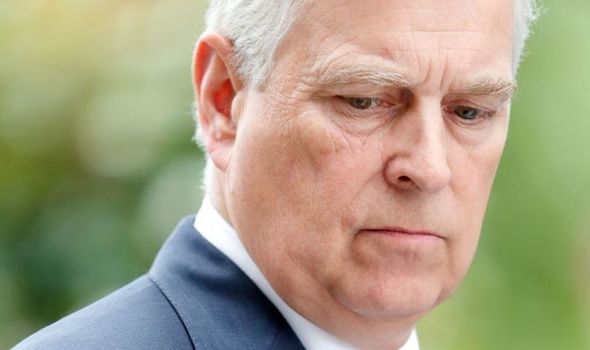 The Queen has already ensured her second son has lost his military titles and the use of His Royal Highness as he faces US civil action over sexual assault allegations – claims he has consistently denied.

But now a Sunday Express poll has found 72 per cent think the Prince should lose the title of Duke of York, with just 13 per cent saying he should keep it and 15 per cent undecided.

And in a further blow, 76 per cent said he should also lose his place as ninth in the line of succession to the throne, with 11 per cent saying he should not and  13 per cent undecided. The poll was carried out by Redfield and Wilton Strategies for this paper.

It came as veteran broadcaster Andrew Marr yesterday predicted an “ethical earthquake” when the Queen dies.

In his first interview since leaving the BBC last month, after more than two decades at the corporation, he said some members of the Royal Family have been “behaving like free riders” in assuming the institution of the monarchy “can never be questioned”.

Mr Marr added that he expected the Prince of Wales and his son the Duke of Cambridge to “orchestrate a clear-out” when in charge – with the aim of maintaining the support of the public.

The devastating poll result for Prince Andrew, 61, follows reports that he faces losing his round-the-clock police protection as early as next month after being stood down as a frontline royal by Her Majesty.

In total, 1,500 adults were polled, although 37 respondents were completely unaware of the allegations against Prince Andrew. They were not asked their opinion on whether he should keep his title or place in the line of succession.

The poll also spelt bad news for Andrew’s nephew Prince Harry, with only 29 per cent saying the Duke of Sussex and his family should be provided with police protection by the Home Office when they visit the UK.

Fifty-eight per cent of those quizzed felt he should not be given police protection, with 13 per cent undecided.

Harry has called for a judicial review of the Home Office decision not to allow him to pay for Met Police security for him and his family when they visit the UK this spring.

They are coming for a Westminster Abbey memorial service for his grandfather, Prince Philip.

It had been hoped that Harry and Meghan, who now live in California, would finally introduce their seven-month-old daughter Lilibet to the Royal Family, who would also have a rare opportunity to see their son Archie, two.

Unless Harry wins his legal battle over security arrangements, this is now considered unlikely to happen.

His uncle Andrew is expected to find little comfort in his dwindling public support as his legal team prepares for his civil court case in New York this autumn, at the height of Her Majesty’s Platinum Jubilee celebrations.

After this month losing his military titles and royal patronages, a source close to the Duke said he would “continue to defend himself” against accusations by Virginia Giuffre.

She is alleging that she was trafficked by the late US paedophile financier Jeffrey Epstein and others to Prince Andrew, and that he sexually abused her when she was under the age of 18 – making Ms Giuffre a minor under US law at the time of the alleged abuses.

She added: “Many are fed up with the disgrace of Andrew’s tawdry behaviour and feel he has demeaned The Queen.”

Andrew’s biographer Nigel Caw-thorne declared: “If an American jury finds against him, there will be no possible road back for him.

“He could end up being driven to live out the rest of his days in a sort of semi-reclusive, self-imposed exile.

“People will hate him here and there’ll be nowhere for him to hide.”

Alternatively, it was pointed out last week that if the Duke wins the case as a private citizen, the Queen could restore his military ranks, patronages and use of the HRH title.

However, the “associate” of Andrew also cautioned that it might be a “different matter” if Andrew’s brother, Prince Charles, has ascended to the throne. But they insisted: “I’m sure he will do what’s right for the family and country.”

In his interview with a newspaper, Mr Marr yesterday said: “There’s a sense the whole issue of the future has not been discussed for a very long time, because the Queen is so admired and so revered.

“When that terrible day comes that the Queen is no longer with us, the country will go into a state of shock.

“It will be like an ethical earthquake and I do not think it is fully understood or appreciated how this is going to be an absolutely massive moment in all our lives.”

He added: “I know the Prince of Wales has plans for reforming the monarchy – it appears Charles and William will orchestrate a clear out.

“It won’t be the same: the modern monarchy under Charles has to earn its place every day, every week and every month in people’s affections.”

It came as another poll revealed the Duchess of Cornwall is on course to win the support of the majority of the public this year.

The study suggest Britons are warming to the idea of Camilla becoming Queen when Charles ascends to the throne. The Duchess, whose popularity has risen slowly since her marriage to the Prince in 2005, is enjoying her most positive public opinion in a decade.

Her approval rating is at 45 per cent, with Charles on 60 per cent, according to a YouGov survey.

It leaves her on course to finally break the barrier of half the population embracing her role in public life.

This will boost hopes that one day she will be accepted as Queen Consort in a change from the Buckingham Palace policy after her marriage, when it was said she would be styled as HRH The Princess Consort when her husband is king.