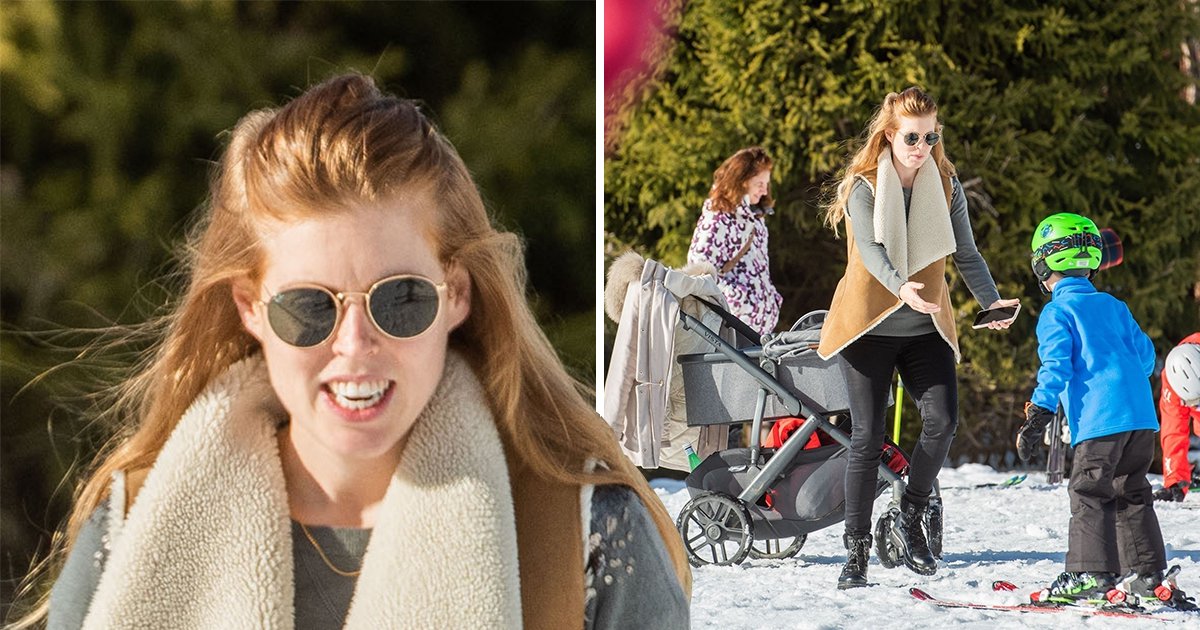 The Duke of York kept a low profile at the Queen’s Windsor estate while his family celebrated the New Year skiing in the Swiss Alps.

His ex-wife Sarah Ferguson, 62, was joined by her daughters Beatrice, 33, and Eugenie, 31, during their winter break at the exclusive resort of Verbier.

Meanwhile Prince Andrew was back in the UK preparing for a court hearing in New York tomorrow to determine whether the rape and sexual assault case against him will go ahead.

The Duke is facing a civil lawsuit brought by Virginia Roberts Guiffre, who claims she was forced to have sex with him on three occasions when she was a teenager.

She says this was arranged by his friend and paedophile financier Jeffrey Epstein, who killed himself in a New York jail cell in 2019 while awaiting sex-trafficking charges.

Andrew vehemently denies the allegations against him. But if he loses his lawsuit he could be stripped of his Duke title, according to royal sources.

The conviction of Epstein’s longtime companion Ghislaine Maxwell for her role in the billionaire’s sex trafficking ring has put Andrew’s relationship with the pair back in the spotlight.

Lawyers for Andrew have insisted that his friend’s conviction will not affect his lawsuit in New York.

Even after the family jetted off to the Duke’s £17.5million chalet on Boxing Day, Fergie, the Duchess of York, kept in constant contact with Andrew as he prepared for the case.

They were joined by Beatrice and Eugenie’s husbands, Edoardo Mapelli Mozzi, 38, and Jack Brooksbank, 35.

Beatrice was also pictured tending to her three-month-old daughter Sienna Elizabeth in a pram on the snow while Edo helped his five-year-old son Christopher Wolfe with his skiing.

The Duke and Duchess of York bought the seven-bedroom Chalet Helora back in 2015 for £13million, despite the couple being separated since 1992.

It reportedly costs up to £22,000 per week to rent and the pair bought it with a mortgage and private funding from the Queen as a ‘family investment’.

The chalet had six permanent staff including a chef and it also features a heated indoor swimming pool, sauna, a bar and sun terrace.

In September it was reported that the Duke was in the process of selling the chalet – the only property he owns, to settle a lawsuit brought by its former owner.

Isabelle de Rouvre sued Andrew and his ex-wife in 2020 claiming they still owed her over £6.6million for the property. They reportedly agreed to defer a payment until 2019 but did not settle the bill.

Chalet Helora is in one the most expensive areas of Verbier, which counts James Blunt and Richard Branson as its fellow residents.

The amount the Duke would have to pay in damages to Ms Guiffre if he loses the case has not been disclosed, but it is expected to amount to several millions.

Andrew’s efforts to block the lawsuit’s progression so far have been rejected by a federal judge.

The Duke’s lawyers claimed there was no basis to go ahead because Ms Guiffre – an American citizen – does not reside in the United States.

They argued the 38-year-old campaigner has lived in Australia all but two of the past 19 years, has an Australian driver’s license.

Lawyers pointed out that she lives in a $1.9million (£1.4million) home in Perth, where she has been raising three children with her Australian husband.

In a statement, Ms Giuffre’s attorney Sigrid McCawley called the request to halt the case ‘just another in a series of tired attempts by Prince Andrew to duck and dodge the legal merits of the case’.

Judge Lewis A Kaplan, in a one-page order, noted Andrew’s lawyers have requested that ‘extensive’ materials be turned over by Giuffre by January 14, including documents related to where she has lived.

He said the Duke’s attorneys have not yet formally raised the defence that the lawsuit cannot proceed on the grounds that Ms Giuffre has been living in Australia rather than Colorado, where her team say she is a resident.

In the cover page of a lawsuit in September 2015, in which she sued Maxwell for defamation for calling her a liar over sexual abuse claims, she listed her address as Penrose, Colorado.

In the cover letter of a lawsuit over claims Epstein trafficked her to lawyer and Harvard law professor Alan Dershowitz – at first when she was 16 – she listed her address as Palm Cove, Australia.

She marked a box a ‘citizen or subject of a foreign country’, but in her lawsuit against Andrew, she put her address down as Ocean Reef, Western Australia, checking the box saying ‘citizen of another state.

Kaplan’s order expressed no opinion on the merits of the Duke’s claims that Ms Giuffre should be disqualified from suing because she lives in Australia.

Oral arguments via a video teleconference on the request to dismiss the case are scheduled for this morning.

In October, Andrew’s lawyers attacked the lawsuit on multiple grounds, saying Ms Giuffre had made false claims against Andrew because he ‘never sexually abused or assaulted’ her.

Their written arguments said: ‘Giuffre has initiated this baseless lawsuit against Prince Andrew to achieve another payday at his expense and at the expense of those closest to him.

‘Epstein’s abuse of Giuffre does not justify her public campaign against Prince Andrew.’

Meanwhile, the claimant has demanded proof that Andrew cannot sweat and evidence of his mysterious trip to Pizza Express in Woking.

He was also asked to produce doccuments concerning his correspondence with Maxwell and Epstein on topics of abuse and his ‘sexual relations with anyone’.

Ms Giuffre claims the Duke sweated on her as they danced at the Tramp nightclub in Mayfair on March 10 2001, before going back to Maxwell’s London townhouse and allegedly having sex.

Andrew said this wasn’t possible as he was unable to perspire due to an ‘overdose of adrenaline’ from when he was shot at during the Falklands war.

He also said he distinctly remembers taking his daughter Beatrice to a party at Pizza Express in Woking that afternoon when she was 12 and then returning home.

A request from Ms Giuffre’s lawyers asks for: ‘All Documents concerning your alleged medical condition of anhidrosis, hypohidrosis, or…your inability to sweat.’

He said: ‘Based on his discovery responses, Prince Andrew has apparently already determined that he has no documents that would be responsive to the majority of Plaintiff’s requests.

‘If Prince Andrew truly has no documents concerning his communications with Maxwell or Epstein, his travel to Florida, New York, or various locations in London, his alleged medical inability to sweat, or anything that would support the alibis he gave during his BBC interview, then continuing with discovery will not be burdensome to him at all.’

‘Fiercely candid!’ Princess Eugenie made honest remarks to her granny growing up