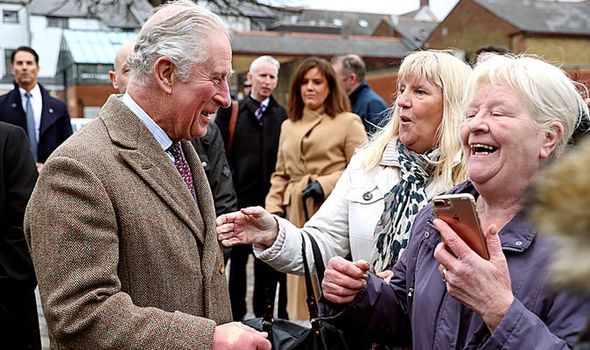 He said to an aide during a visit to a women’s boutique: “Let’s see if there is a way of finding a bit of help.”  Owner Emma Jamal, 40, told him: “Literally every piece of furniture, every piece of stock, has gone in the skip. Hundreds of thousands of pounds. It is gone.” Like many businesses in the town centre, she is not insured for flood damage because of a history of flooding in the area.

Around 80 businesses in Pontypridd and at least 550 homes and more than 500 businesses in the surrounding area of Rhondda Cynon Taf borough have sustained serious flood damage after the River Taff burst its banks on Sunday.

Charles, 71, spent more than an hour in the town and was greeted by hundreds of well-wishers as he walked down Pontypridd’s Taff Street, where many shops are closed due to flood damage.

Richard Oliver, 43, said: “He asked us how we were coping if we had a cooker and if the toilet was working.”

Council leader Andrew Morgan said: “Everyone was pleased to see him. I think it is a bit of positivity in the town in what has been the worst week in decades.”

The tiny German town and the neo-Nazis

A chilling letter has Davos chattering