Home » Europe » Prince Charles: How did heir hurt his thumb?

The heir to the throne – who was in jovial mood during a trip to Cumbria – is famous for getting into scrapes as he lays hedges. And he seemed to have done so again when he marked the 50th anniversary of the vast Pirelli tyre factory in Carlisle. He joked with some of the 900 staff during a tour of the site when he met bosses, shift workers and apprentices. 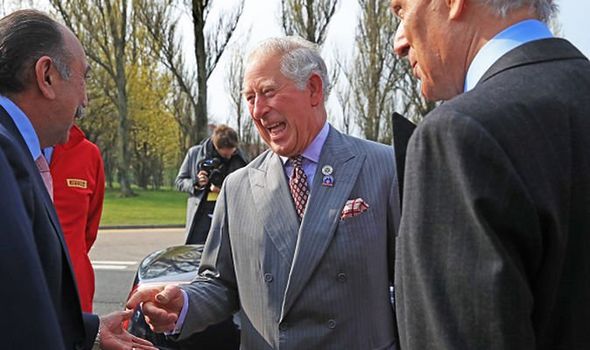 The factory produces tyres for premium and prestige cars, and Charles was shown a range of supercars including a McLaren Spider, a Jaguar E Type, a Ferrari Dino and an Aston Martin DBS Superleggera – all fitted with Pirelli tyres.

He was accompanied on the visit by Italy’s ambassador to the UK, Raffaele Trombetta, and Andrew Mitchell, Britain’s trade commissioner for Europe.

Later Charles, 70, met members of the Langdale Ambleside mountain rescue team and watched a demonstration at their Ambleside headquarters of how they deal with injured climbers and walkers.

The group, which relies on the efforts of volunteers and is funded by public donations, is called out around 100 times a year, with 25 incidents logged so far in 2019.

Charles told the volunteers: “I’m full of admiration for all the work you do, if I may say so, rescuing people and all the different call-outs you have to deal [with] out in this part of the world.

“We are very lucky indeed in this country to have all these different mountain rescue teams.”

Coronavirus forces delay in US extradition case against Assange

Half a million Whirlpool washing machines recalled over fire risk