Prince Charles teamed up with pop star Cheryl to meet young people who have been helped by the Prince’s Trust in Newcastle.

The Prince of Wales kicked off his visit to Cheryl’s Trust in the northeast city earlier today by icing a cake made by members of the youth charity.

The 72-year-old was there to meet and hand out certificates to people who have gained confidence and skills on one of the courses. 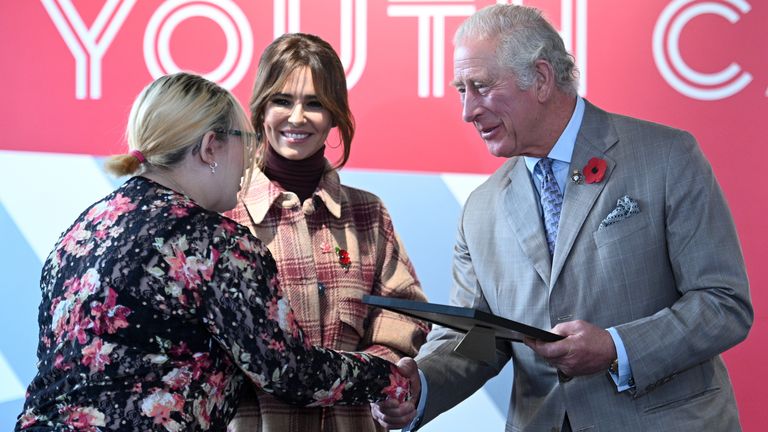 Former Girls Aloud member Cheryl, who has worked with the Prince’s Trust for more than 10 years, also helped give out the awards after she officially opened the trust centre in 2018 after she raised £1m of funding.

Cheryl, who also grew up in Newcastle, said: “It was incredibly inspiring to meet young people in Newcastle today and hear how transformational the Prince’s Trust support has been for them.

“It really does show how important it is that young people have access to this help, so they can build their confidence and skills.” During his visit, Charles also met several young entrepreneurs who have started their own businesses after being given support by the trust.

Satwika Saran, who set up a vegan and vegetarian sustainable food delivery service in Hartlepool called Mas and Monkeys, spoke to the future king about using tiffin boxes for the meals.

She revealed Charles said he was interested in her business and the use of the boxes, which she collects afterwards to ensure there is no plastic waste produced.

The 20-year-old said: “It was surreal talking to him about Bombay – that is the business model that I want to bring to the North East.” James Tyer, 29, also spoke to Charles about the upcoming launch of his delivery service in Newcastle using electric bikes.

He said afterwards: “Charles is a big spokesman for environmental issues, and he seemed very interested in my business.

“I thought I would be more nervous chatting to him, but he was really genuine, and he seemed really interested in what we had to say.”

Dan Hannigan, 18, who received a certificate from Charles and Cheryl after he completed a development course, added: “I wouldn’t have believed 12 weeks ago that I’d be confident enough to speak in front of the Prince of Wales and Cheryl, it was an amazing experience.”

German conservatives raise spectre of far-left rule ahead of election