Prince Edward visited Newcastle city centre to meet and thank people for their help in Queen’s funeral and in the commemorations following her death. Queen Elizabeth II’s funeral was held on September 19 at Westminister Abbey as leaders across the globe visited the UK to pay their regards.

The youngest son of Queen Elizabeth II, the Earl of Wessex, was greeted by Year 5 pupils from Hotspur Primary School as he spent time at Newcastle City Library, before crossing Northumberland Street and heading to Brunswick Methodist Church.

During his visit to the city, he met representatives from the police, ambulance and fire and rescue services along with charity figures from the likes of the Salvation Army and the British Red Cross.

The Earl of Wessex was greeted by children from Hotspur Primary School.

Lord Mayor of Newcastle showed him an exhibition in the library featuring Queen Elizabeth’s visits to the city over the last seven decades. 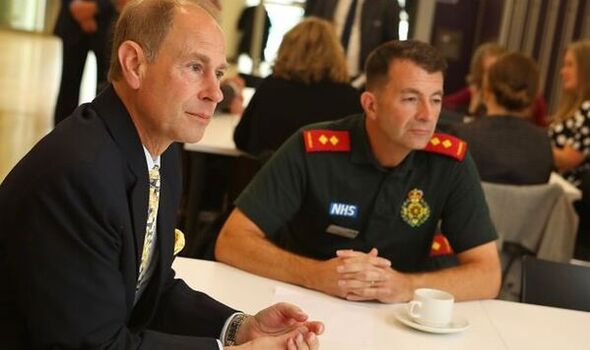 At the library Prince Edward then spent time with council emergency planning staff who helped coordinate the events which followed the Queen’s death.

He was also introduced to the Newcastle Street Pastors team and representatives from the West End Food Bank in Northumberland Street, while at the church he helped a team from Christian charity Junction 42 prepare faith packages to send to prisoners around the UK.

Helen Hinds, who was among the local authority figures to show Prince Edward the books of condolence in honour of his late mother, met the Prince during his visit.

She told ChronicleLive: “We are all part of the local resilience partnership and we have been working for years to prepare for Operation London Bridge.”

She added: “He asked whether the plan had worked well and we were able to tell him that all of the hard work that had gone into it had definitely paid off.

“We also told him of the reaction from our communities, with lots of people of all ages having attended the proclamation.”

Ryan Youngs, from Tyne and Wear Fire and Rescue Service, also chatted with the Prince as he explained how he had been honoured to play a role in Queen Elizabeth’s memorial proceedings.

He told the publication: “We were picked to go down to support the proceedings.

DON’T MISS:
‘What a lineup’ Fans praise panel ahead of ‘epic’ Question Time clash
Truss lists top priorities ahead of her European Community visit
Oil cartel joins hands with Russia in bid to cut output by 2m per day

“We are from the prevention and education team and were working with colleagues at Royal Berkshire.

“We were offering fire safety advice to people in Windsor, who might have been laying candles.

“It was obviously very sad but a privilege to be there.”