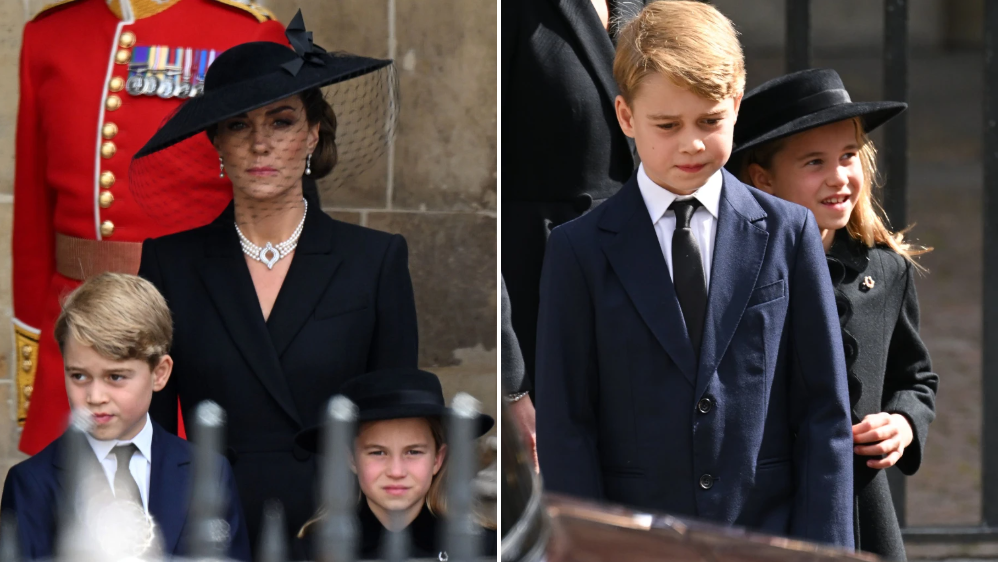 The Queen’s great grandchildren, George and Charlotte, knew exactly what Gan-Gan carried in her sturdy handbags.

With a twinkle in her eye, as she saw them skipping down the corridors of Windsor Castle, she would delve deep – and hand sweeties out to them all.

Today marked the moment that the pair said their final thank you and goodbye to their beloved great-grandmother.

With his mother, the new Princess of Wales close by, the young Prince George walked sedately into Westminster Abbey, dressed in a smart blue suit, his face pale and pained.

Alongside the nine-year-old was his little sister Princess Charlotte, seven, also dressed smartly wearing a formal hat and a horse brooch that had been gifted to her by her Gan-Gan, who walked solemnly as she clutched her mother’s hand.

With their hair neatly combed and their suit and dress as immaculate as their behaviour, the children are now second and third in line to the throne.

It’s worth remembering that just 11 days ago, after moving to Windsor, these two young children enjoyed their first full day at a new school – rushing out to tell their waiting mother all about it.

Then, a red-eyed Kate gently broke the news that their beloved great grandmother was dead.

What a rollercoaster the royal children have had since then – balancing new friendships and new classrooms with the hardest lesson of all – how to say goodbye.

Recently, the Princess of Wales is said to have reassured wellwishers in Norfolk that all three children were coping ‘well’ with the loss of their grandmother, with one of crowd telling the BBC that Kate thanked her daughter when she enquired after the children, saying that ‘they were doing well and they were being looked after at school.’

She reportedly told another wellwisher that George understood his great-grandmother’s death but his younger sibilngs ‘less so’.

After they arrived at the service in a car with the Queen’s Consort, Kate’s comforting hand was never far away from her children – on one occasion she placed it lovingly on George’s knee during the service, while another she gently guided Charlotte gently as they prepared to file out.

Meanwhile William, Prince of Wales, glanced proudly down at his wide-eyed son several times during the service.

Following the service, as the children joined their parents at Wellington Arch to watch the Queen’s coffin begin it’s journey to Windsor, it’s reported that Charlotte mouthed to her big brother to ‘bow’, giving him a timely reminder of royal protocol.

It’s almost exactly 25 since William was made to walk behind his own mother’s coffin, after the sudden death of Diana, Princess of Wales, who was buried on September 6 1997.

The sight of William, aged 15 and Harry, just 12, his fists clenched in emotion, walking behind her coffin was in sharp contrast to the visible support given yesterday to young Prince George and Princess Charlotte from their openly affectionate parents.

George gazed wide-eyed at his Gan-Gan’s coffin – ever now aware, as his parents said this week, of the historical part of his own destiny this funeral plays.

Their little brother Louis, aged four, was deemed too young to attend the service. But some of the Queen’s younger grandchildren were there to say their farewells too – Lady Louise Windsor, 18, and James, Viscount Severn, 14, looking visibly upset.

When they joined their older cousins in a vigil at Westminster Hall last week, their mother Sophie Wessex looked beside herself. Perhaps, she was worried about the toll such a public goodbye takes on young people.

However, as today showed, the well behaved and well coached youngsters were the greatest credit to their extraordinary grandmother and Gan-Gan, who left them not only a royal legacy but one filled with amazing memories and love.