Prince Harry drinks tea on a bus with James Corden

Prince Harry, 36, joined his longterm pal and chatshow host James Corden for a very special interview. The prince and the British comedian hopped on top of a doubledecker bus for an episode of The Late Late Show With James Corden. During their open-air tour of LA the old friends exchanged jokes and Harry spoke publically about leaving royal life behind for the first time.

In a nod to the pair’s British roots, they drank tea and ate scones as they were ferried around LA.

The tour even included a visit to the house where the Fresh Prince of Bel Air was filmed for a quick bathroom break and to try and put an offer on the home.

Mr Corden, even FaceTimed Harry’s wife Meghan to get her views on the potential purchase.

The comedian told the Duchess: “You’d be the fresh princess of Bel Air. 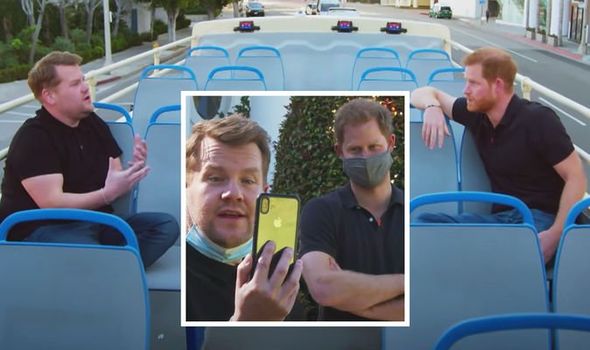 Surprised by Meghan’s nickname for her husband, Mr Corden joked: “Haz? I didn’t know we were calling you that,” to which Harry hit back: “Well, you’re not my wife.”

As well as sharing his son Archie Harrison’s first word was “crocodile” and revealing that the Queen had gifted him a waffle-maker for Christmas, Harry spoke about his decision to leave royal life behind.

The Duke said: “It was stepping back rather than stepping down.

“It was a very difficult environment, as a lot of people saw.

“We all know what the British press can be like, and it was destroying my mental health.

“I was like, ‘This is toxic’, so I did what any husband and any father would do, I want to get my family out of here.

“We never walked away and as far as I’m concerned whatever decisions are made on that side, I will never walk away.

“I will always be contributing, but my life is public service, so wherever I am in the world, it’s going to be the same thing.”

The interview aired one week after the Queen confirmed Meghan and Harry would not be returning to their roles as senior royals.

If you have Sky you can find Sky Comedy on channel 113.

If you have Virgin Media you can find Sky Comedy on channel 121.

A clip of the programme is also available to watch on The Late Late Show with James Corden’s YouTube channel.

A description of the episode on YouTube reads: “Now that the Duke and Duchess of Sussex are settled into Southern California, James Corden thought it was time to show his friend Prince Harry the sights.

“From tea on an open-top bus to visiting the “Fresh Prince of Bel-Air” mansion, Prince Harry gets the tour he never dreamed of.

“Special thanks to Spartan for providing an incredible Spartan Race Obstacle Course to run.”