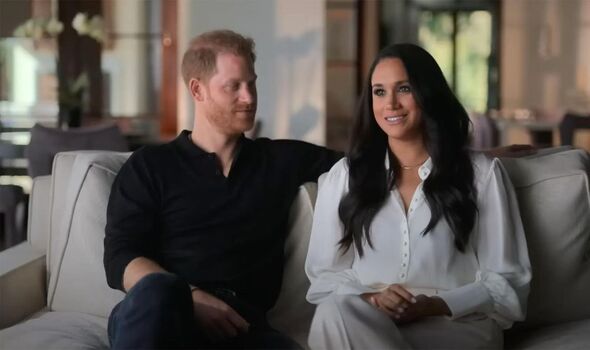 Thousands of people have voted for Meghan Markle and Prince Harry to be stripped of their Duke and Duchess of Sussex titles, while others have said they should hand them back as a courtesy, out of their own volition.  A new poll of Daily Mail readers has led calls for the couple to be stripped of their royal titles, with an overwhelming 98 percent of some 62,000 voters now saying they should no longer be duke and duchess.

In addition to the poll, an editorial in The Times released today said the couple should give up their titles and Harry should remove himself and his family from the line of succession.

The newspaper said it was “hypocrisy” for Harry and Meghan to claim to be royal after their damaging allegations about the Firm and the Palace were made in their Netflix documentary.

It said the couple’s “snide remarks” would have damaged Britain’s reputation around the world.

The newspaper said: “They have made clear that they consider themselves to be at war with the institution of monarchy, an institution that they appear to hold in contempt.

“They should therefore hand back their titles.

“The duke should also take himself and his family out of the line of succession.”

The Times praised the monarchy’s “remarkable dignity and restraint” over the decision not to counter the extraordinary allegations made in the six-part Netflix series which includes claims Prince William effectively bullied Harry out of the Royal Family and that senior royals were jealous of Meghan’s popularity.

In its editorial column, The Times said: “Their snide remarks will have upset millions of Britons who hold the monarchy, and especially the late Queen Elizabeth, in high regard. They will have damaged Britain’s image in the world.”

In the documentary, released in two parts on Dec 8 and Dec 15, Harry said he and Meghan had offered to give up their titles as part of their negotiations to step back as senior royals.

The couple had wanted a “hybrid” deal which would allow them to represent the Queen while also working on commercial projects, but this request was rejected.

Harry said he had told his father that if his idea was not possible, “then we would be willing to relinquish our Sussex titles, if need be”.

The titles were bestowed by the late Queen, Harry’s grandmother, when the couple married in 2018, along with Harry’s subsidiary titles as Earl of Dumbarton and Baron Kilkeel.