Prince Harry, 36, and Meghan Markle, 39, have left royal life behind for good after it was confirmed the couple will not return to their roles as senior members of the monarchy. A statement from the Palace on Friday confirmed the couple would have to return their royal patronages to the Crown and that Harry would also have to give up his honorary military roles.

As well as his 10-year career in the Armed Forces, Harry held several ceremonial military positions including that of Captain-General of the Royal Marines passed down to him by his grandfather Prince Philip, 99, in 2017.

Harry has had to give up this role as well as his titles of Honorary Air Commandant, RAF Honington and Commodore-in-Chief, Small Ships and Diving, Royal Naval Command.

A Buckingham Palace statement confirmed the posts will be redistributed to senior members of the monarchy in due course.

The statement read: “The honorary military appointments and Royal patronages held by The Duke and Duchess will therefore be returned to Her Majesty, before being redistributed among working members of The Royal Family.” 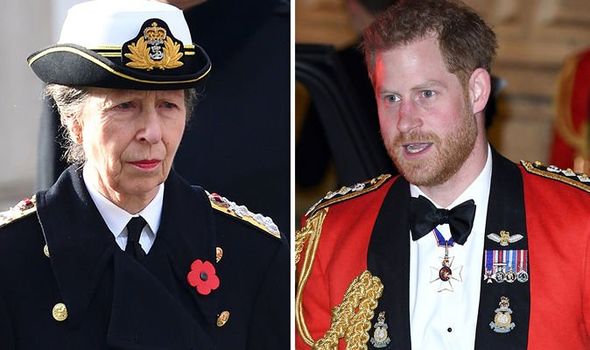 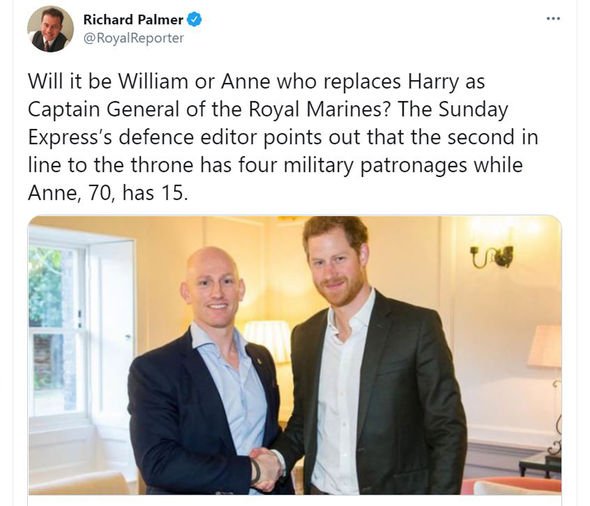 Which royals are most likely to get Prince Harry’s military titles?

There are seven key senior members of the monarchy who provide vital support to the Queen.

They are as follows:

While the Palace is yet to confirm which of these royals could take on Harry’s titles the matter has already sparked a lively debate on social media.

On Sunday, Daily Express correspondent Richard Palmer shared a Sunday Express story about the future of Harry’s former Captain-General of the Royal Marines role on Twitter. 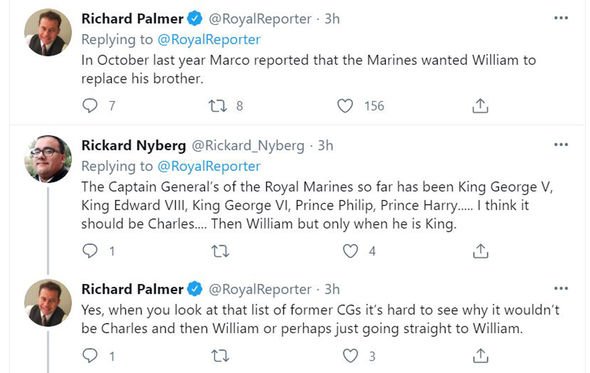 In the tweet, Mr Palmer posed the question: “Will it be William or Anne who replaces Harry as Captain-General of the Royal Marines?

“The Sunday Express’s defence editor points out that the second in line to the throne has four military patronages while Anne, 70, has 15.”

In a series of follow on tweets, Mr Palmer added: “With no brother to help shoulder the burden of responsibilities, William is going to have a good deal on his plate.

“But how many extra responsibilities will Anne want to take on and for how long?”

“For some in the forces, it’s a more important question than it might seem at first sight.

“When wounded troops came home from Afghanistan and Iraq, they were often happier to see members of the Royal Family visiting them in hospital than the politicians who had sent them there.”

And in another tweet, Mr Palmer pointed out that Sunday Express defence editor Marco Giannageli previously reported Prince William was tipped to take the role.

He wrote: “In October last year Marco reported that the Marines wanted William to replace his brother.”

The series of tweets prompted a flurry of responses from social media users apparently divided on who should take on the important post.

One wrote: “The Captain General’s of the Royal Marines so far has been King George V, King Edward VIII, King George VI, Prince Philip, Prince Harry….. I think it should be Charles…. Then William but only when he is King.” 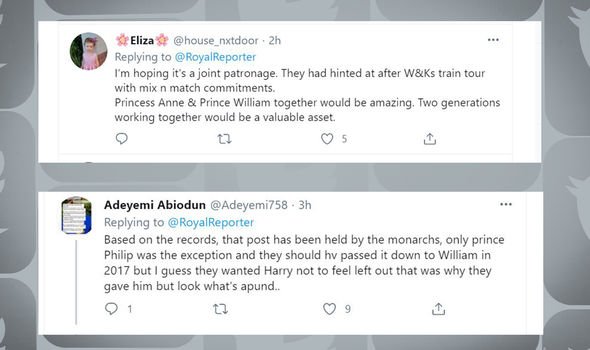 While another suggested handing William the role could stoke “animosity” between the two brothers.

They wrote: “Prince William would be an excellent candidate but I’m afraid this would lead to comments that Harry had to give up his position for PW and feed animosity. Harry left so HMTQ shouldn’t have to take this into consideration but emotionally speaking it’s not that easy.”

A third wondered whether Princess Anne and William could share the post, writing: I’m hoping it’s a joint patronage.

“They had hinted at after W&Ks train tour with mix n match commitments. Princess Anne & Prince William together would be amazing.

“Two generations working together would be a valuable asset.”

Another claimed the hardworking Princess Royal would be well-suited to the job, writing: “Anne & she will do a very committed job.”

One fan pointed out before Prince Philip took the post it was one that historically had only been held by monarchs.

They wrote: “Based on the records, that post has been held by the monarchs, only prince Philip was the exception and they should have passed it down to William in 2017 but I guess they wanted Harry not to feel left out that was why they gave him but look what’s apund..”

While the Palace is yet to confirm who will take over from Harry, bookmakers Ladbrokes have Prince William pinned as the hot favourite.

COVID-19: Pupil attacks govt for ‘shocking’ lack of detail on when schools will reopen and exams will take place