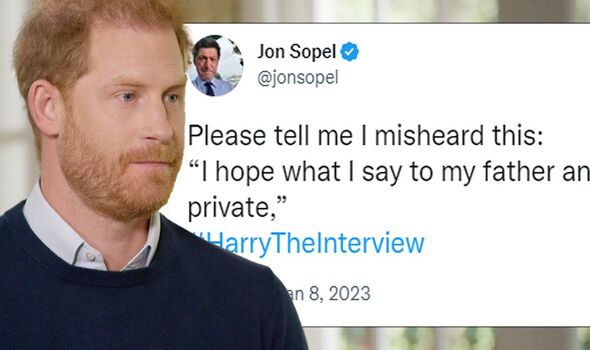 Prince Harry has told a primetime TV interview “with no expression of irony” that he hopes any reconciliation with the Royal Family will be done in private. Despite appearing in a six-part “global event” Netflix series, releasing a memoir and appearing in huge UK and US network interviews, the Duke of Sussex apparently saw no irony when he claimed he hoped future talks with his family would be done in private.

So far both Buckingham Palace and Kensington Palace have refused to be drawn into addressing the host of accusations made by Prince Harry both in print and on TV against his brother, father, step-mother and sister-in-law.

Appearing with ITV’s Tom Bradby on Sunday night, the 38-year-old royal said he did not know if his family would be watching his appearance.

He said: “I don’t know whether they’ll be watching this [interview] or not, but, what they have to say to me and what I have to say to them will be in private, and I hope it can stay that way.”

In a slight challenge to Harry’s narrative, interviewer Mr Bradby discussed a physical altercation the Duke has claimed happened between him and his brother, during which Prince Harry said he was pushed into a “dog bowl”.

Mr Bradby said of William’s feelings: “He felt that there was an issue. I think he would say he found you emotional, defensive, he couldn’t get through to you, he found it extraordinarily frustrating.”

Seemingly not making the connection between his hopes for a future private audience with his family and his own very public media appearances, Prince Harry has been lambasted online for not seeing the irony.

Former BBC broadcasting veteran Jon Sopel tweeted after the ITV interview: “Please tell me I misheard this: ‘I hope what I say to my father and brother remains private’.”

Chris Ship, ITV News royal editor, joined the chorus of doubt with the description: “Of this interview, Harry says: ‘I don’t know whether they’ll be watching this or not, but, what they have to say to me and what I have to say to them will be in private, and I hope it can stay that way’.

“(Harry says this with no expression of irony) #HarryTheInterview.”

It has now emerged more viewers watched BBC’s Happy Valley than tuned into the much-anticipated interview with the Duke of Sussex on ITV, according to overnight figures.

‘Harry: The Interview’ drew an average TV audience of 4.1 million, based on data released by ITV.

The broadcaster said the 90-minute programme, in which Harry was interviewed by Tom Bradby as part of the promotion for the duke’s memoir, Spare, ahead of its release on Tuesday, achieved the channel’s highest rating for a factual programme for more than a year.

In comparison, the second episode of series three of BBC One’s Happy Valley, which started at the same time – 9pm on Sunday – and lasted 60 minutes, had an average audience of 5.3 million TV viewers.

The crime drama, which was written and created by Sally Wainwright and stars Sarah Lancashire as Sergeant Catherine Cawood, returned on New Year’s Day for its final series after last being broadcast in 2016.

DON’T MISS: Kate praised on her birthday as “totally loyal” in subtle swipe at Harry