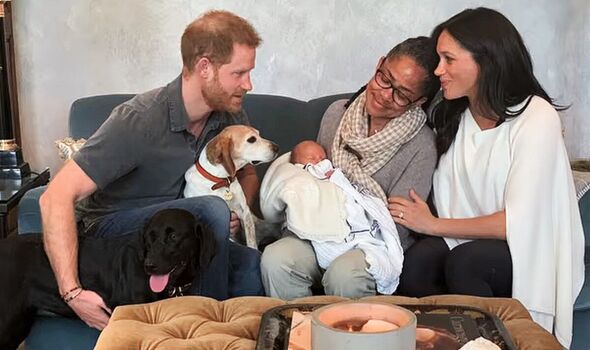 The Duchess of Sussex shocked the world in the couple’s infamous Oprah interview with claims that they had married before the big day at St George’s Chapel, Windsor. She said: “Three days before our wedding, we got married. No one knows that.

“The vows that we have framed in our room are just the two of us in our backyard with the Archbishop of Canterbury.”

Harry said that “Meghan exchanged vows” in a private garden ceremony witnessed by the two dogs, adding it “hadn’t been official, or binding, except for us”.

Meghan’s remarks had sparked confusion as to which had been the real ceremony and Archbishop of Canterbury Justin Welby was forced to reiterate “the legal wedding” had been on Saturday, May 19, 2018. “I signed the wedding certificate, which is a legal document, and I would have committed a serious criminal offence if I signed it knowing it was false,” he said.

The couple later said they had only exchanged “personal vows”. In Spare, Harry described how he nervously stood at the altar until “Meg came towards me as if she were in a cloud” and as she “drew nearer, I gave thanks for all the choices I had made”.

His father Charles walked Meghan down the aisle and he added: “It wasn’t her father, but even so it was someone special, and she was thrilled.

“It didn’t make up for Thomas Markle’s behaviour or how the press had used the man, but it helped a lot.” The pair had exchanged rings, with Meghan’s made from the same Welsh gold as Kate’s. The Queen “had told me practically nothing remained of it now”.

He wrote: “The last little piece of gold. That’s how I saw Meg. The Archbishop got to the official part, pronouncing the words that would convert us into the Duke and Duchess of Sussex, titles bestowed upon us by my grandma, and unite us till death do us part, although we had already done it days before, in our garden, during a small ceremony in which it was just us two. Guy and Pula were our only witnesses.

“It hadn’t been official, or binding, except for us.” While “grateful” to those who queued outside or watched at home, he said: “But our love had started in intimacy, and making it public had almost always brought suffering, hence we wanted the first consecration of our love, our first vows, to be as intimate as possible. However magical the ceremony was, we had ended up being slightly averse to crowds.”

Elsewhere in the book, Harry admits taking two Corgi ornaments from Buckingham Palace without asking. He gave them to two trusted staffers who had helped with their departure from Britain as “a reminder of this strange mission”.

“Nobody is going to miss them, I assured them. Those words felt to me as if they were laden with a double meaning.”

Harry has claimed William attacked him in the kitchen of his former London home, Nottingham Cottage.

He said reports he was William’s best man were a “bare-faced lie”, adding that his brother was “tipsy on last night’s rum” while meeting guests before marrying Kate.