Prince Harry, 36,  spoke out for the first time since his grandfather Prince Philip’s funeral on Saturday as he marked Earth Day with a powerful plea. Harry is President of the African Parks charity and championed conservation as he honoured his late grandfather’s legacy on Thursday.

Harry’s message read:  “As we now begin to move towards an era of global recovery and regeneration, it’s critical that we continue to look at the strengthening and protecting of biodiversity, not just as a value we hold—but as a responsibility that is vital to our way of life.”

“On this Earth Day, I reflect on generations of conservation champions, including my late grandfather, and feel proud and energised to continue doing my part in this legacy.

“This year especially, I join the incredible African Parks team and communities around the world in shared dedication to our environment and collective wellbeing.”

Harry is now back in California with his wife Meghan Markle and his son Archie following his bride trip to Britain for Philip’s funeral. 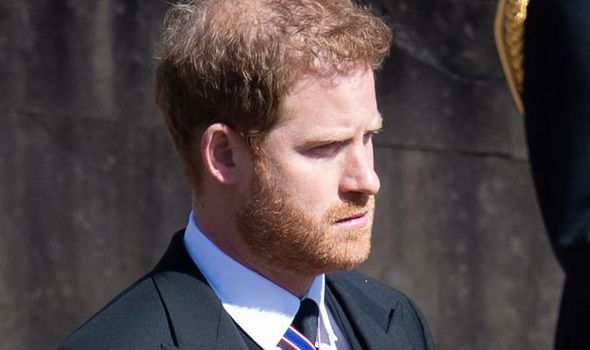 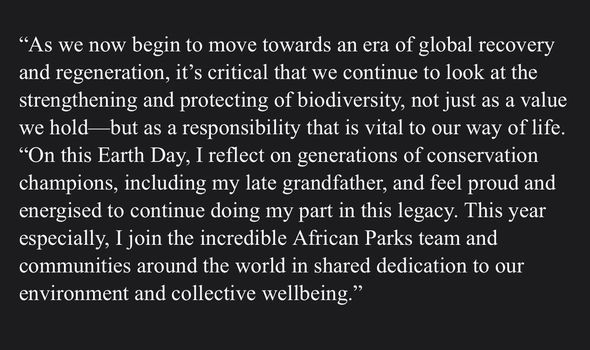 The statement was released alongside a new African Parks video with a voiceover from the Duke of Sussex.

Royal reporter Omid Scobie shared the clip on Twitter with the message: “Prince Harry has narrated a re-release of @AfricanParks’s ‘Hope Starts Here’ for #EarthDay.

In a follow-up tweeted Mr Scobie shared Harry’s statement and said: “Harry has been President of @AfricanParks since 2017 and is currently assisting them to grow to 30 national parks under management by 2030 (currently they manage 19 parks in 11 countries).


“In a statement for #EarthDay, the duke also honoured Prince Philip’s own conservation work.” 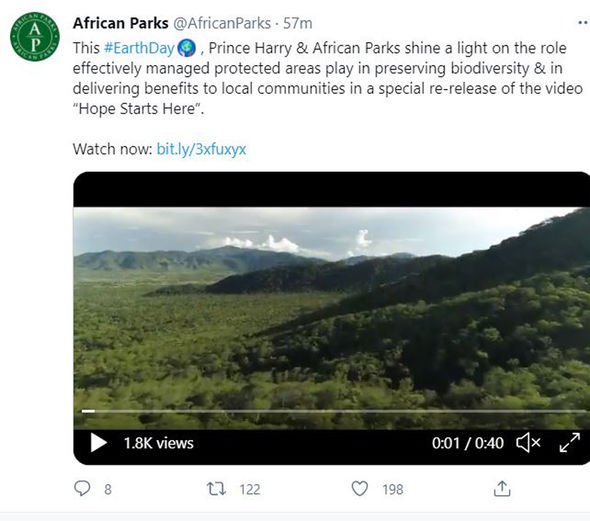 Harry is a vocal environmentalist and has worked with African Parks since 2016 where he helped them complete their historic 500 Elephant translocation in Malawi.

The Duke is currently assisting the organisation to grow to 30 parks under management by 2030.

African Parks CEO Peter Fearnhead praised Harry’s support in his statement to mark Earth Day which read: “Alongside the dedication and commitment of Prince Harry, and with our transformational funders and all our Government partners, we are realising the value of these wild areas by ensuring that the people who live within or around them truly benefit from them being conserved.

“It is a sure way forward in helping to create a sustainable future for local communities, and for our planet.”