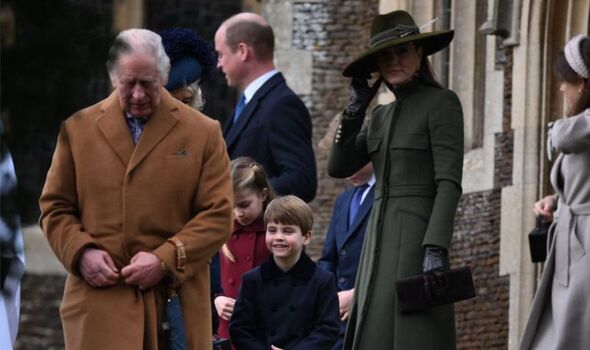 Prince Louis, ever the character, managed to find a way to divert the attention from his mother Kate Middleton as the pair walked alongside Prince William, Prince George and Princess Charlotte towards Norfolk St. Magdalene’s Church in Sandringham for the Christmas Day church service. They were joined by King Charles III and Camilla, the Queen Consort.

Along the short stroll in front of wellwishers and photographers, they greeted royal fans who’d patiently waited for a glimpse of the Firm.

The Prince and Princess of Wales were all smiles as they greeted onlookers and waved back.

However, cheeky Prince Louis could be seen pulling faces and impatiently trying to hurry his mother along as she stopped to chat to visitors.

He could be seen throwing his body weight behind his mother’s arm in an attempt to get her to stop talking.

In other photos, he was spotted skipping and pulling funny faces at his older siblings as he gripped on to a plush toy, smiling broadly.

It marked the first time Prince Louis enjoyed the limelight at the Christmas service.

But it is not the first time Prince Louis made headlines with his spirited behaviour.

In 2022, her pulled a string of faces during the Queen’s Trooping the Colour air show as part of her Platinum Jubilee celebrations.

He caused hilarity as he attempted to shush his mother in the Royal Box watching the Platinum Jubilee Pageant.

The young prince could be seen repeatedly placing his hand over Kate’s mouth.

According to a body language expert however, Prince Louis’ silly antics don’t reflect poorly on his wider character.

The expert explained that the prince shares a very “caring” relationship with older brother George.

She said he is “protective” of him, in a way that is similar to how Prince William was in childhood with his younger brother Prince Harry.

Judi James, a leading expert in body language and social behaviour, has said the eldest children are being given more independence than their younger brother.

In an interview with the Mirror, she said that William and Kate made several “intentional gestures” to show they are becoming more confident with their eldest children.

The body language expert said: “William and Kate showed off their children with the usual signals of pride and it was clear they are now becoming ‘hands-off’ parents as their children grow in confidence.”

The body language expert explained: “One of the sweetest and most poignant body language signals was the sight of George using touch, chat and bending rituals to signal he is now in the role of protector and ‘keeping-an-eye-on’ monitor for his younger brother Louis.

“As the family reached the church William put a hand out to touch George’s back and leaned towards his elder son but George was already using those same rituals towards his small and rather playful brother.”

‘Will not go to Edward!’ Earl of Wessex set to miss out on Duke title, says source