Queen Elizabeth II’s late husband Prince Philip has been honoured by the Pope just hours after his death on Friday. The leader of the Catholic Church reached out to the Royal Household to pay tribute to the Duke of Edinburgh.

Pope Francis’s telegram to the Queen read: “Saddened to learn of the death of your husband Prince Philip, Duke of Edinburgh, His Holiness Pope Francis offers heartfelt condolences to Your Majesty and the members of the royal family.

“Recalling Prince Philip’s devotion to his marriage and family, his distinguished record of public service and his commitment to the education and advancement of future generations, His Holiness commends him to the merciful love of Christ our Redeemer.

“Upon you and upon all who grieve his loss in the sure hope of the resurrection, the Holy Father invokes the Lord’s blessings of consolation and peace.” 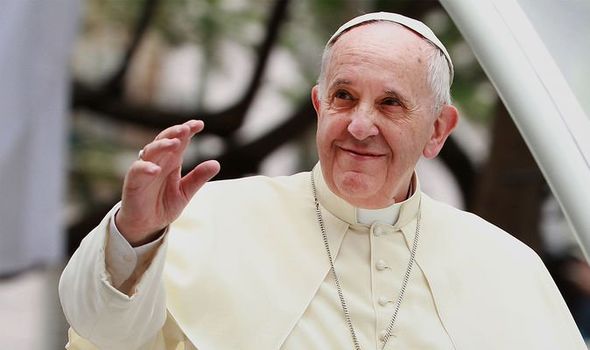 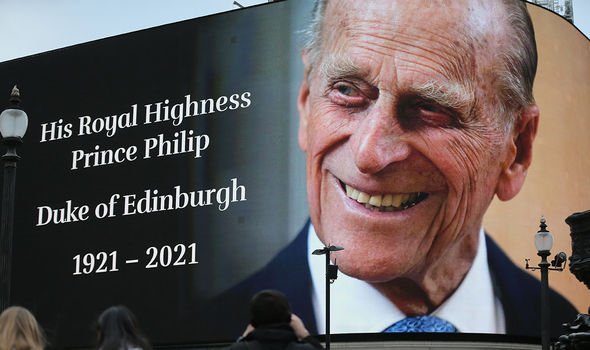 The Royal Family is in mourning following the Duke of Edinburgh’s death which was announced by the Palace at 12pm on Friday.

While Prince Philip had been seriously ill in recent months and spent his longest-ever stint in hospital from February 16 to March 16 it is understood his death still came as a shock to the Royal Family.

The Duke and the Queen were married for an extraordinary 73 years and Philip was known to be her closest confidant.

Although Philip did not share his wife’s constitutional powers he was known to be the Queen’s sounding board when it came to tricky royal matters. 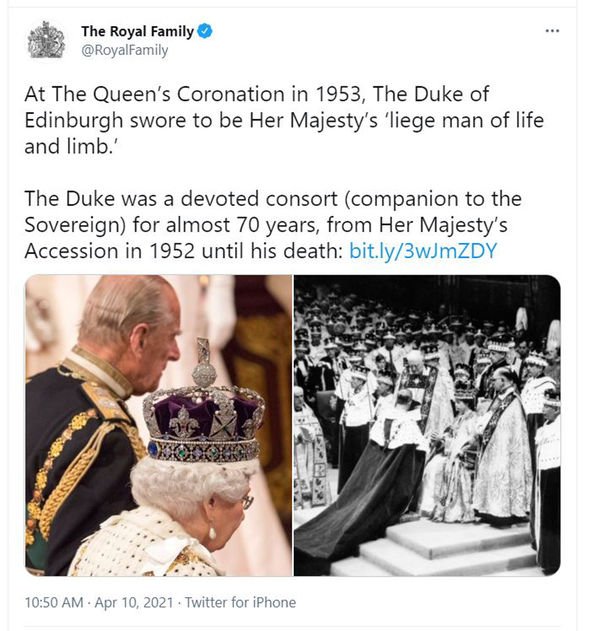 The Queen will have no doubt sought the Duke’s counsel following the royal crisis sparked by Meghan Markle, 39, and Prince Harry’s, 36, explosive interview with Oprah Winfrey last month.

While the Duke was in hospital at the time the interview aired in the UK, the Queen is likely to have kept him up to date on all the details.

The Duke died just months before he was due to celebrate his 100th birthday on June 10.

While the Government and the Palace have urged crowds against gathering at royal residences to pay their respects, dozens of floral tributes have continued to be laid by members of the public outside Buckingham Palace and Windsor Castle.

On Saturday the Queen shared a sweet tribute to her late husband and consort on Twitter.

The first tweet featured a portrait of the couple taken by photographer Annie Liebovitz and read:  “He has, quite simply, been my strength and stay all these years, and I, and his whole family, and this and many other countries, owe him a debt greater than he would ever claim, or we shall ever know.

The quote was taken from the Queen’s speech to mark their golden wedding anniversary in 1997. 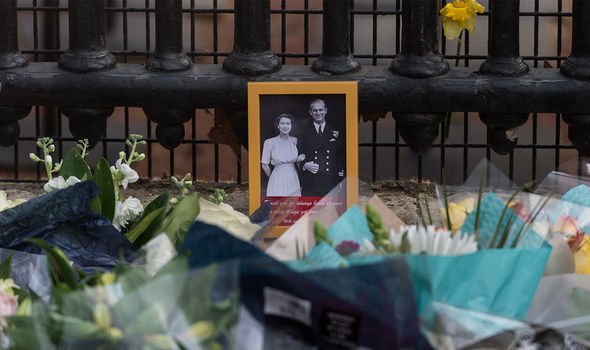 “At The Queen’s Coronation in 1953, The Duke of Edinburgh swore to be Her Majesty’s ‘liege man of life and limb.’

“The Duke was a devoted consort (companion to the Sovereign) for almost 70 years, from Her Majesty’s Accession in 1952 until his death.”

The tweet was accompanied by a link to the Royal Family’s official website where a page was dedicated to Prince Philip.

Man with Tourette's 'kicked out of pub for swearing'