The Duke of Edinburgh, the longest-reigning consort in history, was married to Queen Elizabeth II for 73 years. As her husband, the Duke made sure Her Majesty was not disrespected and would become “incandescent” with anyone who took aim at her, according to royal biographer Gyles Brandreth.

The author told Mirror.co.uk: “For more than 70 years, he did everything he could to safeguard her person and her dignity.

“He hated to see her taken advantage of in any way.

“One year, at the Royal Variety Performance, one of the stars performed a routine aimed directly at the Queen.

“Prince Philip was incandescent and descended on the producer in the interval: ‘I’ve been coming to this for 50 years. 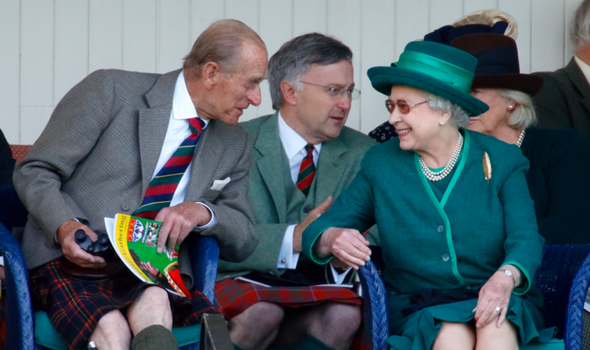 “It never ends on time. The jokes are lavatorial. And now you insult the Queen!’”

Mr Brandreth also recounted a time when Philip had to make way among a multitude of photographers for the Monarch.

He said: “More than once, on a walkabout with the Queen, I saw him barking at the press photographers, telling them to ‘get out of the way’.

But Prince Philip was also charismatic and became known for his sense of humour, which purportedly made the Queen laugh.

Mr Brandreth said: “Prince Philip protected the Queen and made her laugh.

“Once, during one of the Jubilee tours, I was in the car immediately behind theirs and I watched Prince Philip telling the Queen a story.

“He kept her laughing for 20 minutes. It was a joy to behold.”

On Friday, Buckingham Palace confirmed Prince Philip had died at Windsor Castle, just two months away from his 100th birthday.