LONDON — Toward the end of the carefully choreographed, 50-minute planned funeral service for Prince Philip, scheduled for Saturday, the “Last Post” will be played by musicians from Britain’s Royal Marines. But the military buglers will then have one further duty requested specifically by Prince Philip: sounding so-called Action Stations — a call used on naval warships to summon crew to battle readiness.

Announcing the funeral plans, Buckingham Palace said on Thursday that the ceremony will reflect the personal wishes of Prince Philip, who had a distinguished naval career, serving in the Second World War, before becoming consort to Queen Elizabeth.

But — at a time when many families have lost relatives to Covid-19 and pandemic restrictions remain in place — the arrangements reflected the reduced scale of an occasion trimmed to comply with government rules.

The funeral is scheduled for Saturday at 3 p.m. and will be televised but will take place behind the formidable walls of Windsor Castle. With Covid-19 concerns in mind, Buckingham Palace has urged people to stay away, saying there will be nothing for the public to see.

Only 30 mourners will enter St. George’s Chapel, where the service will be held, and all will wear masks and sit socially distanced, including the queen.

The proceedings seem designed to ease tensions within the royal family where possible. No military uniforms will be worn, a decision that avoids singling out Prince Harry, who lost his military titles after stepping aside from royal duties and could have been the only senior male royal in civilian clothing — despite having served in Afghanistan for the British Army.

Saturday’s ceremony will be the first time Prince Harry has reunited with his family since he said in an interview with Oprah Winfrey last month that his brother and father were trapped in an unhappy life as royals. But he will not be placed directly next to his brother, Prince William, in a short funeral procession that will take place through the grounds of Windsor Castle. 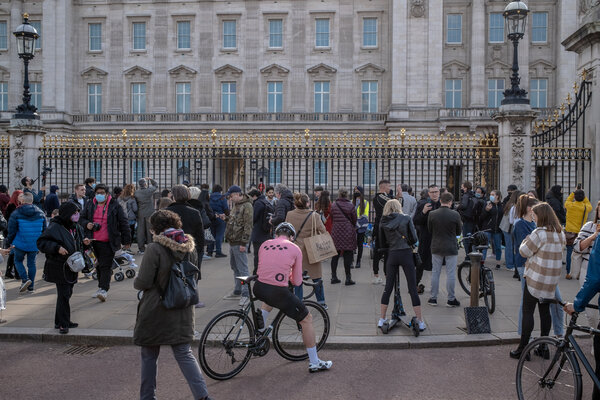 During the procession, the coffin will be moved to St. George’s Chapel. The procession will be led by the band of the Grenadier Guards, a regiment of which Prince Philip was colonel for 42 years.

Queen Elizabeth will arrive at the chapel by car, but Princes Charles, Andrew and Edward, as well as Princess Anne and Princes William and Harry, will follow the coffin on foot as it is driven the short distance to the chapel on a modified Land Rover four-wheel drive.

Not only did Prince Philip choose this vehicle, he is also thought to have helped with its modification as part of plans that he approved.

In normal times crowds would have gathered as would hundreds of mourners who would have been invited to attend. But, with numbers so restricted, even Prime Minister Boris Johnson is not attending.

The choir will be reduced to just four people, and mourners will not be encouraged to sing. At the end of the ceremony — after a lament has been played, the buglers have performed, and the national anthem been sung by the choir — the coffin will be lowered into the chapel’s Royal Vault.

Funerals for senior members of the royal family are planned in advance as contingencies and given code names based on different bridges. In Prince Philip’s case, the code name was Forth Bridge, a reference to the city of Edinburgh, and the prince’s title as the Duke of Edinburgh.

Buckingham Palace has not said when Prince Philip last approved his funeral plans, or whether he did so once Covid-19 restrictions were in place, requiring the ceremony to be slimmed down.

But planning for the funeral first began so long ago that the prince was said to have once remarked that several of those who helped to design it never lived to see it, having predeceased him.

Elderly woman (70s) in serious condition after crash in Howth