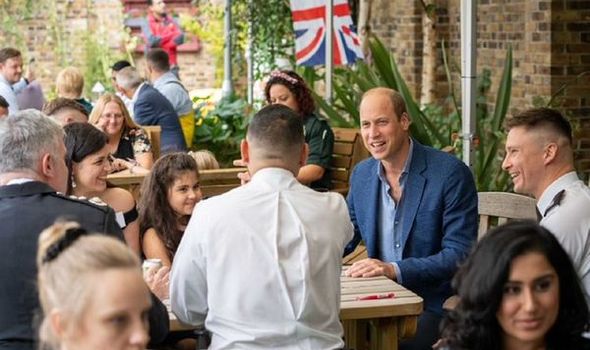 To mark 999 Day, the Duke of Cambridge met with some of the people who are “saving lives” across the UK. On his first visit since July, Prince WIlliam sat down with the “incredible” lifesavers as they reunited with those they had saved.

Kensington Royal tweeted: “This #999Day we’re saying a huge thank you to everyone working and volunteering in the emergency services and the NHS.

“Today The Duke met some of the incredible people saving lives across the UK, as they were reunited with those that they saved.”

They tweeted: “Meeting 5 year old Lila, who was successfully resuscitated by ambulance technician Charlotte Speers, along with fire-fighters Marc Rustage and James Knight, after she collapsed #999Day”

Royal fans were quick to praise William on his first outing for months with many declaring the “future king is back”.

One person wrote: “Yes, Our Future King is back!”

While another person commented: “Prince William knows first hand what it’s like being a first responder, I love that he’s able to share experiences with all the other brilliant emergency service staff.

“They do such a brilliant job.”

And a third said: “Such an important subject (that he is extra connected because of his job as a RAF search and rescue pilot years ago) to support right on the first engagement since the Duke’s summer break ended.

Someone else said it was “so good” to see the Duke of Cambridge after “so long”.

Prince William was last seen back in July when he sat down with Team GB boxer, Lauren Price, ahead of the Tokyo 2020 Olympics.

She opened up about losing her grandad Derek to dementia in the past year and said: “The Olympics mean the world to me.

“If I could win a gold medal it would top everything in my career.

“It’s something I take with me, knowing that he [her grandad] is always looking down on me.”

The Duke of Cambridge told the Olympian: “I’d bet your grandpa is very proud of you, and I’m sure you’ll make him even more proud at the Olympics.”

Price went on to win gold against Li Qian of China.

“It was fantastic to hear your story in person ahead of #Tokyo2020.

“I know your nan Linda and the whole of Ystrad Mynach will be so proud of your incredible achievement, as are we! W.”

Trains disrupted for one week after ‘dangerous hairline cracks’ found