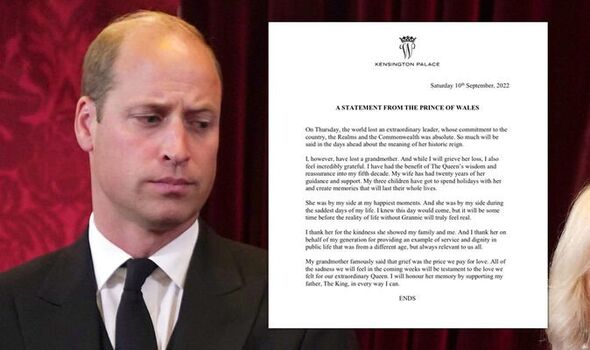 The Prince of Wales said in a statement issued by Kensington Palace today: “On Thursday, the world lost an extraordinary leader, whose commitment to the country, to the Realms and the Commonwealth was absolute. So much will be said in the days ahead about the meaning of her historic reign. I, however, have lost a grandmother. And while I will grieve her loss, I also feel incredibly grateful.”

“I have had the benefit of the Queen’s wisdom and reassurance into my fifth decade. My wife has had twenty years of her guidance and support.

“My three children have got to spend holidays with her and create memories that will last their whole lives.

“I knew this day would come, but it will be some time before the reality of life without Grannie will truly feel real.”

The statement continued: “I thank her for the kindness she showed my family and me. And I thank her on behalf of my generation for providing an example of service and dignity in public life that was from a differnt age, but always relevant to us all.

“My grandmother famusly said that grief is the price we pay for love. All of the sadness we will feel in the coming weeks will be testament to the love we felt for our extraordinary Queen.”

William’s statement ended: “I will honour her memory by supporting my father, the King, in every way I can.”

The heir to the throne’s moving tribute came not long after he watched the Accession Council proclaim the new King as Sovereign in a ceremony at St James’s Palace.

William put out a guiding hand behind his stepmother Queen Consort Camilla, who now bears the style Her Majesty, as she gingerly navigated the step up onto a platform, moving into the spotlight in an opulent room in the palace which was packed with some 200 Privy Counsellors.

The prince cast his eyes down as Lord President of the Privy Council Penny Mordaunt opened the proceedings, discharging her “sad duty” to inform those gathered of the passing of Her “Most Gracious Majesty Queen Elizabeth II”.

William was the first to sign the Proclamation, carefully stepping forward to pick up a pen with his left hand before placing his signature on the historic record, as he replaced the lid and set down the pen.

He was followed by Camilla, who slowly signed her named with care. Her eyes darted briefly towards William as she returned to his side on the dais.

The prince moved back and forward just a touch as he stood with his hands clasped, with the grieving pair both solemn but in control of their emotions.

As the order of business for the proclamation was set out, William gazed upwards at the ceiling surveying the grand surroundings – in the palace he knew well as a child.

With the short proceedings at a close, William acknowledged Prime Minister Liz Truss as the party made their way through to the Council Chamber for the second part of the Accession Council.