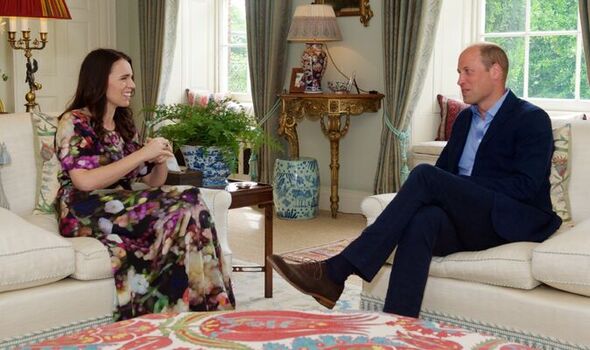 The palace released a picture of them at William’s London residence. A spokesman for the duke said the meeting took place on Saturday. Ms Ardern was in London for talks with Prime Minister Boris Johnson, with trade and the war in Ukraine dominating the agenda.

The Kiwi PM has previously said that she admired Queen Elizabeth II, who is New Zealand’s official head of state.

New Zealand’s media outlet Stuff quoted her saying: “When it comes to Her Majesty, I channel the exact same sentiment that you heard in New Zealand during the jubilee celebrations – such admiration for her decades of service to New Zealand in particular.”

“I can tell you from the engagements that I’ve been privileged to have with Her Majesty, her affection for New Zealand is very, very genuine, and it’s very much appreciated.”

On Friday Mr Johnson greeted Ms Ardern with a handshake outside the door of Number 10, welcoming her on her first UK trip since the pandemic began.

Mr Johnson pointed out that it was her first trip since the two countries signed a fresh free trade deal in February.

Ms Ardern’s visit to the UK and Europe was an “incredibly important milestone for us in New Zealand”, she stated, during her meeting with Boris Johnson.

New Zealand only recently reopened its borders to international visitors, after two years of a strict border policy amid the global pandemic.

Ms Ardern said it signified “we are open for business, for trade, for tourism”.

The New Zealand prime minister said the pair would be discussing the recently signed trade deal and progress on ratification.

She said the deal was good for both the UK and New Zealand.

Ms Ardern also said they would discuss the situation in Ukraine.

She told the Prime Minister it was a good “opportunity” to discuss the way the two countries have together responded to the war, noting the UK leadership on the conflict.

“We have also provided our military aid via our partnership with you,” she told Mr Johnson.

On Friday, the PM and his Kiwi counterpart signed an agreement to extend the Youth Mobility and Working Holiday schemes.

The maximum age limit for applicants will be raised from 30 to 35, and the maximum length of time people can stay in the host country will be increased from various durations to three years.

The reciprocal visa schemes are aimed at giving people a better understanding of each country.

Teenagers killed in house party stabbing 'were known to each other'