William spoke by video call with five military personnel and told them: “I really appreciate all the hard work you guys are doing at the moment. It’s making a huge difference.” He added: “I hope we come out of this lockdown very soon and a bit more social contact and life can come back to normal as soon as possible.” The future king heard how some people had been cooped up on their own so long that they felt liberated at vaccination centres.

The second in line to the throne asked: “Are some of them a little bit unsure of, one, being in a social setting having been inside for so long but also about the jab?”

Private Jack Morelli of the Army’s 16 Medical Regiment told him: “Very rarely. I think the bigger thing is trying to move them along and dampen their enthusiasm if anything because so many of them have been cooped up inside the house for so long.

“They want to just chat your ear off for ages and it’s absolutely lovely. But yeah, it’s so nice to see them so happy.”

Leading Naval Nurse Megan Muirhead, of the Joint Hospital Group (South West), described the joy of being able to bring a bit of normality back for a 26-year-old unable to go out. 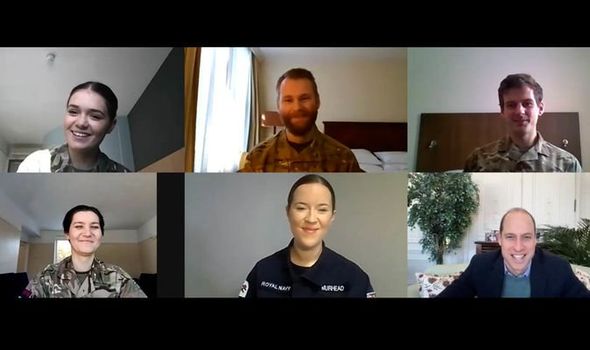 She said: “He’s got a condition through no fault of his own and he was just so excited to meet up with his friends and just have some social life back.”

She added that “for him his whole world had stopped. So it was lovely to be able to give him back a bit of normality really.”

William, 38, hosted the video call from Sandringham on Wednesday last week but Kensington Palace only released the video yesterday.

Private Morelli, who has worked at centres in Southend, Peterborough, and Bury St Edmunds, added that people have so much “enthusiasm because they do start to see light at the end of the tunnel now”.