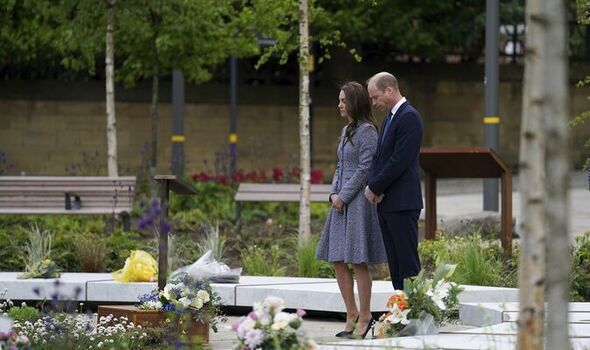 The royal couple went to Manchester city centre to officially open the Glade Of Light memorial to the 22 men, women and children who died in the 2017 terror attack. After the ceremony, Kate, 40, laid flowers at the halo-shaped shrine and garden. She was wearing beeshaped earrings – a nod to Manchester’s emblem.

William, 39, praised the “extraordinary” city for its response to the atrocity and told how he related to the families’ heartache.

Echoing a lyric by Manchester band Oasis, he added that the proud northern city had refused to “look back in anger” at the attack and had responded to hate with love.

He added: “I remember only too well the shock and grief on the faces of those I met when I visited Manchester in the days following the atrocity. Five years on I know the pain and trauma has not gone away.

“As someone who lives with his own grief I also know what often matters most to the bereaved is that those we have lost are not forgotten.

“There is comfort in remembering, in acknowledging, that while taken horribly soon, they lived. They changed our lives. They were loved, and they are loved.”

Following the ceremony, the royal couple met some of the bereaved families and those involved in the response effort in a private event in Manchester Cathedral.

Waiting outside was seven-yearold Archie McWilliams, from the First Longford Scout Group in Stretford, who had flowers for Kate.

The family of 14-year-old victim, Nell Jones, of Holmes Chapel, Cheshire, called the memorial “a lovely, quiet, peaceful place”. Nell’s mother Jayne Jones said: “It is so soothing.” Of her grief she said: “I don’t know how you cope with it but you do.”

The Platinum Jubilee Pageant has picked three eco-friendly charities to back in celebration of the Queen’s 70-year reign. The first is The Save Me Trust, co-founded by Queen guitarist Brian May, which supports UK wildlife.

The Queen’s Green Canopy is the second, and invites people to plant a tree for the Jubilee. Wheels for Wellbeing, the third, fights for better cycling facilities for disabled people.

Rosanna Machado, chief executive of the Platinum Jubilee Pageant, said the call for donations – set up online via Pinwheel – will “create a lasting sustainability legacy”.

Britain Outlined the Impact of a No-Deal Brexit. It’s Not Pretty.