Princess Anne appeared to fight back emotion as she stood in vigil for her mother, the Queen.

The Princess Royal, together with her siblings Prince Andrew, King Charles and Prince Edward are standing in a silent vigil for 15 minutes.

The Queen’s daughter had her head bowed and held back an emotional expression as she stood beside her mother’s coffin. 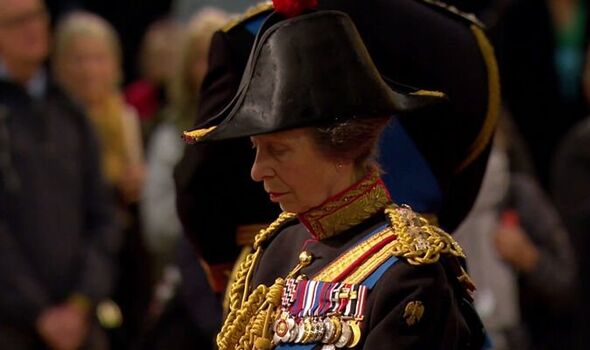 On Monday (September 12), all four of Queen Elizabeth II’s children gathered around her coffin for a vigil inside the St Giles’ Cathedral in Edinburgh. This was the first instance of a female attending such an event.

The tradition dubbed the “Vigil of the Prince” has taken place twice before.

The late Queen Mother’s four grandsons – the former Prince of Wales, the Duke of York, the Earl of Wessex and Viscount Linley, now the Earl of Snowdon – stood guard over her coffin in her honour in 2002.

And in 1936, King George V’s sons – Edward VIII, the Duke of York (later George VI), Henry, Duke of Gloucester and George, Duke of Kent – carried out the first such tribute in for their father, late in the evening on the final night of his lying in state.

As mourners queued to pay their respects to the late monarch on Monday, King Charles and his siblings stood by the coffin in solemn vigil for 10 minutes.

Princess Anne wore her navy ceremonial uniform at Monday’s vigil. While the Princess Royal did not serve in the military herself, like many royals she holds a number of military honours and titles.

The uniform she has been pictured in is a Royal Navy ceremonial uniform – she was made a Rear Admiral in 1993, before being promoted to Vice Admiral in 2009 and finally Admiral in 2012. In 2020 Anne was also made a General in the British Army and an Air Chief Marshal in the Royal Air Force.